Cancer in the Age of Social Media 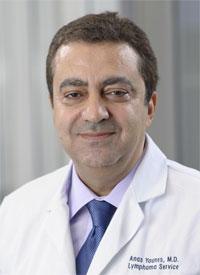 Anas Younes, MD, is the Chief of Memorial Sloan Kettering's Lymphoma Service in the Division of Hematologic Oncology, Department of Medicine. He is also very active on social media (@DrAnasYounes). In this post, he explores the issues raised by the recent debate over columns published in in The New York Times and The Guardian with the assistance of other cancer doctors on social media.

I will tell you in two words,
who I am, what I do, and how I live. May I?
Who am I? I am a poet.
What do I do? I write.
And how do I live? I live.
In my carefree poverty
I squander rhymes and love songs
When it comes to dreams and visions and castles in the air,
I have the soul of a millionaire.

On a recent morning, I received a tweet from a man in the United Kingdom who told me that he just mentioned me on a live BBC program. Not knowing who the man was, I hesitated clicking on the link that he provided. But after I looked him up and found out that he was a real person, I opened the link. The title of the program was “Is There an Honorable Way to Deal with Terminal Illness?” That made me more curious, as I did not know why someone would mention my name in such a program.

But then I got some clues from the introduction to the program, which stated:

We discuss the lively debate currently in the media and online about an American woman tweeting regular detailed updates of her daily life with breast cancer. Journalist Bill Keller wrote in The New York Times that Lisa Adams' Twitter feed gave "false hope" and portrays those who chose palliative care instead of fighting cancer as "failures." His wife, Emma Gilbey Keller, also wrote "what are the ethics of tweeting a terminal illness? Is this educational or too much?" In spite of this, Lisa Adams has vowed to continue sharing her story. She tweeted that it is "better (to) be honorable (as it) reflects on (my) family." What is your reaction to this story?

Here is the link, if you would like to listen to it: http://www.bbc.co.uk/programmes/p01pgpzz.

According to the news, Lisa has a stage IV breast cancer and recently received experimental therapy at Memorial Sloan Kettering Cancer Center (MSKCC). I have never met Lisa, but I have seen her tweets. In addition to tweeting details of her struggle with cancer, she is a strong advocate for the empowerment of patients, for cancer research, and for participation in clinical trials.

Over the past few days, it seems that everyone has had an opinion about this issue. So before I tell you my opinion, let me first give my disclosure: I am pro patients, pro cancer research, pro clinical trials, and pro MSKCC. Because you may correctly think that my opinion is biased, I decided to reach out to some of my friends and colleagues—some have a personal experience with cancer, and all are active on social media. I made it clear that I was more interested in the debate over the issues raised in The New York Times and The Guardian columns, and the reaction they evoked. I also secured their permission to use their names and opinions in this blog.

All believed that while doctors should have boundaries and follow certain professional rules when engaging the public on social media platforms, they felt that patients should “set their own boundaries.” Dr. Michael Fisch (@fischmd), Chairman of the Department of General Oncology at MD Anderson Cancer Center (MDACC), added that “generally speaking, the ‘better’ viewpoints tend to get amplified relative to those that are more extreme or inaccurate or off base.” Similarly, Dr. Naoto Ueno (@teamoncology), Executive Director of Morgan Welch Inflammatory Breast Cancer Research Program and Clinic at MDACC, did not feel that patients’ use of social media should have boundaries, as long as they are truthful about what they share online. Dr. Ueno, who has been treated for cancer, said that he sometimes struggles with his roles as a cancer survivor and a physician: “I sometime want to say things as a patient, but I cannot say it because I am a doctor.”

Most felt that the columns did address an important social and humanistic issue. However they all agreed that the columns could have avoided unnecessary distractions from an important topic if they had avoided reducing the issue to a single individual. Dr. Robert Miller (@rsm2800), a breast cancer expert at Sidney Kimmel Comprehensive Cancer Center at Johns Hopkins and the Editor in Chief of Cancer.Net, thought both columns “seemed to be unprovoked ad hominem attacks against a single individual who was suffering greatly from metastatic disease but who had chosen for herself to share it publicly to educate others.” He added that the columns were full of “baffling inaccuracies,” but agreed that it was unfortunate that the articles’ focus on one individual’s story detracted from the larger conversation about the role of social media as a form of expression for patients with advanced cancer.

In fact, doctors’ participation in social media can also provide similar educational opportunities to the public. That is why my name was mentioned in the BBC program. Many oncologists now have a presence on Twitter. They share valuable and credible information on cancer news and clinical trials. They also make themselves available to answer questions and provide general guidance to the public. Many participate in discussion forums that include patients and advocates that attract millions of impressions. Doctors are also teaming up with professional foundations to moderate Twitter “chats” to answer questions from the public.

Dr. Miller pointed out that “if you follow the #bcsm hashtag you will find many other patients who blog or share their clinical stories on Twitter.” Other patients derive great benefit from hearing their stories and feel vindicated when they experience similar treatment side effects, coping issues, lack of attention to psychosocial care by their physicians.” Dr. Thompson added, “As more patients do it—with or without everyone agreeing it’s a good idea—figuring out whom to follow may be an issue.”

Lisa may have told her story in 140 characters, rather than two words.
She told us who she is, what she does, and how she lives.
When it comes to dreams, visions, and castles in the air,
No doubt, Lisa has a soul of a millionaire

And that is my opinion!