When the Weather Outside is Frightful 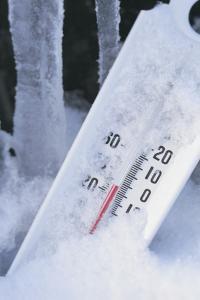 Over the last few days winter has definitely descended on the majority of the United States. Some haven’t seen temperatures this cold in more than two decades! With forecasters calling for temperatures in northern and central states to drop as low as -60˚F (-51˚C) with wind chill, everyone is being urged to stay indoors. Heeding these warnings is especially important for people with cancer.

Because people with cancer are often at higher risk for illnesses caused by cold temperatures, such as hypothermia and frostbite.

Hypothermia develops when the body can’t produce enough heat to keep itself warm. Unfortunately, some medications and medical conditions caused by cancer or cancer treatment can interfere with the body's ability to adjust its temperature. Dehydration, a common side effect of cancer treatment, and having a low amount of body fat may also make a person more prone to developing hypothermia when exposed to cold temperatures.

Extremely cold temperatures, like those we are currently experiencing, can also cause unprotected skin and the underlying tissue to freeze in a matter of minutes, causing frostbite. The skin will become firm, pale, waxy, and numb. Frostbite most often occurs in the fingers, toes, nose, and ears. People being treated for cancer who have developed peripheral neuropathy (a nerve disorder) are at even greater risk because this side effect causes them to be less sensitive to temperature extremes.

So what can you do to stay as healthy as possible during this blast of arctic cold and throughout the winter?

Drink lots of fluids to keep your body hydrated. Consuming at least nine cups of water each day for women and 12.5 cups for men (including both food and drinks) is the general guideline from the Institute of Medicine.