Keep the Fun in Funeral 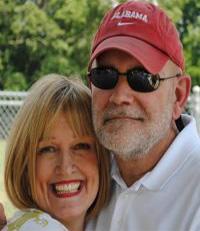 Pat Godfrey McRee is a 20-year, three-time breast cancer survivor and has served as the Director of the Flying Colors Cancer Network for 18 years. She works daily with people diagnosed with all types of cancer, creating programs and facilitating groups that encourage them from diagnosis through the rest of their lives. Her mission is to help people find joy in the cancer journey and feel a sense of community with other survivors, to be encouraged by new research, and to even poke fun at what scares them the most.

After a phone call confirming my second breast cancer diagnosis, I climbed in the car, hit the highway, and turned on the tears. Turned on the radio too, and guess what song filled the air as I faced a second mastectomy? “Another One Bites the Dust”! Just a few mile markers down, those tears turned to laughter as I sang the chorus of my new anthem.

Were the days that followed all fun and games with a smattering of silliness around every corner? No, but it was amusing to visit my oncologist a few weeks later and hear this greeting, “Well, Pat, you’ve got no more mamms to gram.” And I don’t.  But in their place, besides a top-notch reconstruction, I have the deep knowledge that, if I keep my eyes open and my heart tuned to the right station, a chuckle is coming my way.

This knowledge actually came with my first diagnosis eight years earlier. After surgery, it seemed that if I let myself start to cry, stopping might be impossible. Scared? Yes. Positive that I was terminal and planning a funeral? Absolutely. So I set the timer on the oven and commenced sobbing until it dinged. And, yes, I reset it a time or two ‘til it all just seemed ridiculously funny and I realized I was well-done.

Chemo and the resultant hair loss soon followed. What a day when that reality hit! Go back to 1994 with me. We’re in a lovely little suburban restaurant, ceiling fans spinning overhead. I’m sensing something in my peripheral vision and finally give it my full attention. It’s something alright…it’s my hair, swirling upward into the fan blades, then sharing with six sister fans. Should we ask for the check and hightail it out of there or stick around and watch folks send back their fuzzy food? To this day, my companions and I wish we had stuck around! That would have made for a real story.

Okay, so the weeks pass. You already know I’ve been having my “this cancer is going to kill me—cremation or burial?” moments. But a girl’s gotta work to keep herself occupied as death approaches, so I fly off to Dallas on a business trip. A few hours in and at last I’m getting past the preoccupation with my early demise when our group breaks for an off-site dinner. We gather outside the hotel lobby as taxis line up. First group of four…Yellow Cab. Second group of four…Yellow Cab for them too. Me and the other stragglers…the Terminal Cab Company! My memory tells me I refused the ride.

Rolling along to 2012, Cancer #3 is discovered because there’s a funny feeling under my arm. Chest wall tumor in a lymph node, a gift from Cancer #1 after 18 years. I won’t bore you with how petrified I was (decision: cremation) but, long story short, I had a wreck the week after giving up my hair. A five-car pile-up. I’m the final one to get smacked, and the new wig goes flying forward, then passes me on its way to the backseat. In a panic, before checking to see if I’m badly injured, I recover those blonde tresses. Fear dissolves into fun as I realize I have indeed been injured…I have Wiglash!

How crazy would it be to sit around anticipating what entertainment Cancer #4 or any of life’s future crises might bring? Very. But I’m truly thankful for my cancer trifecta—for the lessons learned about resilience, for the opportunity to choose joy, for the absolute assurance that a merry heart is good medicine.

The moral of this story: When life’s tragedies go flying by your head, flip ‘em over on the funny side, poke a stick at ‘em and die laughing.