A Cause for Celebration 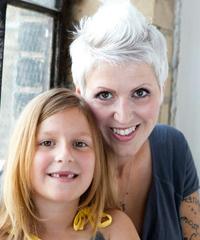 Heather Von St. James is an eight-year mesothelioma survivor and has made it her mission to help others with mesothelioma around the globe. She shares her personal story to help spread hope and awareness to others going through a similar situation, in the hope that one day no one else will have to.

When one thinks of celebrations, happy occasions come to mind, such as birthdays, anniversaries, and promotions, but not necessarily the day one loses a lung to cancer. Leave it to my family and me to buck tradition and do things our own way.

I was diagnosed with malignant pleural mesothelioma on November 21, 2005, just three and a half months after the birth of our only child, Lily. My husband and I were still riding the waves of emotion from becoming new parents, and now we were faced with the very real possibility of me losing my life due to this cancer that I had only heard about on commercials.

Upon diagnosis, I was given 15 months to live, unless I was found to be a candidate for a very invasive surgery called an extrapleural pneumonectomy. The surgery consists of removing the cancerous pleura (lining of the lung); the entire lung; half of my diaphragm and the lining of my heart, both of which would be replaced with surgical Gore-Tex; and my sixth rib. The main obstacle was that this surgery would have to be performed in Boston at Brigham and Women’s Hospital, 1,400 miles away from my home and new baby. Not really an occasion to celebrate, one would think.

After a whirlwind trip to Boston to see if I was even a candidate for the surgery and a confirmation of the mesothelioma diagnosis, I found out that I was a perfect fit. In my mind, this WAS a reason to celebrate. Surgery was set for February 2, 2006, Groundhog Day. I promptly nicknamed my tumor Phil, in honor of the famous groundhog, and joked with the medical staff that if my tumor saw its shadow, I would have six more weeks of recovery.

Humor has always been my way of dealing with troubling situations, and this battle was no different. Nicknaming my tumor took the fear away from the situation and helped me cope day to day with the “what ifs.” As the surgery day grew closer, my time was taken up by making travel plans, making arrangements for Lily to live with my parents in my childhood home while I was in Boston, and keeping in close touch with my sister who would be my post-surgery caregiver while I was in Boston.

My sister and I both have the same crazy sense of humor. She quickly jumped on the bandwagon and started addressing the fact that I was to have my lung removed. She declared that in our home, Groundhog Day would henceforth be called “Lung Leavin’ Day,” the day my lung left, and that it should be cause for celebration. She and my husband dreamt up a fictional celebration where we would have a huge bonfire, and there would be plates that we would write our fears on. Then we would take the plates and smash them into the fire, smashing our fears in the process. It was fun to talk about and to think of while I prepared for surgery.

The next year was spent going through four sessions of chemo, 30 sessions of radiation therapy, and basically recovering and raising my daughter. Her first year of life is a blur, overshadowed by all I went through. During that year she turned one, and we had a huge party to celebrate.

As the one-year anniversary of my surgery approached, I had forgotten about “Lung Leavin’ Day,” but my husband didn’t. He had gone out and bought two plates, a couple of sharpies, and built a bonfire in our backyard. That first year it was just the two of us outside in -17 degree weather smashing our plates—and it felt GOOD.

A tradition was born that night. We decided right then that Lung Leavin’ Day was cause for a huge celebration and had to be shared with our friends and family. It is more than the day I lost my lung; it was the day I got my life back—my rebirthday.

On the second anniversary, about 40 people came to celebrate with us. The next year, we were up to 60. It has steadily grown year after year, and we started using the occasion as a fundraiser for mesothelioma research, which is grossly underfunded. It’s been quite humbling to have friends tell me the impact the spirit of the day has had on them. It helped one overcome the sorrow of a horrible divorce. Another was able to face an eating disorder head on because of writing fears and smashing them. The kids even get into it, and write everything from monsters and ghosts to broccoli on their paper plates to throw into the fire.

Sharing the day with other cancer warriors, no matter what type, has been the most rewarding part of it. Who would have thought that a day I lost my lung would be something friends and family from all over would celebrate with us. As far away as Virginia and England, friends celebrate in their own way, either by breaking plates, or by writing on paper plates and burning or tearing them, all in the name of Lung Leavin’ Day.

I don’t let fear of the cancer ruin my life. I don’t let the fact I lost my lung get to me or mourn the loss. I am just not wired that way.

Reframing the very thing that most people fear the most has made my life happier, as well as those around me. I hope on February 2, 2015, you take a moment to face your fears, give your voice, and conquer them. It takes all the power fear has over you away, so you can see clearly and celebrate the victories.