Cancer Has Given Me Courage 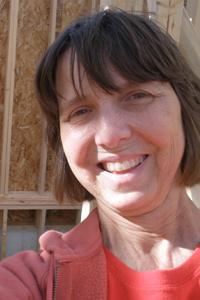 In 1986, I was pregnant with my third child and excited to be interviewing for a job on the assembly line at a General Motors plant near my home in Brodhead, Wisconsin. Hiring requirements included a physical examination and a chest x-ray, which was done by my obstetrician to avoid any radiation harm to the fetus. I was young, just 29, and thought I was in excellent health, so when I got a call from my doctor telling me I had a large mass in the middle of my chest and that he thought it was cancer, I was shocked. A biopsy of a swollen lymph node confirmed I had Hodgkin lymphoma.

I saw an oncologist at a large medical center and was advised to terminate my pregnancy and start treatment immediately. But by then I was five months pregnant and refused the advice. My cancer treatment would have to wait.

I knew the next few months would be difficult. The cancer made it impossible for me to take the job at General Motors, and that meant that my husband Tom, who was already working six to seven days a week as a mechanic, would be under even greater pressure to provide for our growing family. My illness also meant that he would have to take on the additional responsibility of caring for our children once I started treatment.

Although I had some fearful moments, once I made the decision not to be treated until after the baby was born, I felt at peace and had a sense that I was going to be fine. I had no way of knowing that I would be struggling with cancer for the next three decades.

After my daughter Kimberly was born, I had thoracic surgery to remove the mass in my chest and 33 rounds of radiation to my mediastinum (space in the chest between the lungs), which put me in remission for four years. Two weeks before I was scheduled to see my oncologist for my final checkup, I noticed a mass behind my left ear, which was later diagnosed as Burkitt’s lymphoma, possibly the result of all the radiation therapy to my chest and lower face.

I had surgery to remove the mass and was prescribed a regimen of five chemotherapies, but despite the aggressive treatment, the cancer progressed rapidly. My only chance to halt the cancer, said my oncologist, was an autologous bone marrow transplant. There were seven of us on the transplant unit, but I was so sick from the induction therapy, I didn’t get to know any of them very well, which I’ve always regretted. I had my transplant in January 1992 and was cancer-free for 18 years.

Then, in the fall of 2010, I began feeling lethargic, I was having trouble breathing, and my voice grew hoarse. I knew something was seriously wrong. I made an appointment with my primary care physician, who found a small mass on the back of my tongue. A biopsy determined that it was diffuse large B-cell lymphoma. My oncologist treated me with four cycles of rituximab (Rituxan), and I’m currently in remission.

Coping with the aftermath of cancer

My history with cancer has extended over so many years, and for a while I struggled with severe panic attacks. People think once you’re through with treatment, the terror of having cancer is over and it’s time to move on. But that’s not how it works, especially when you have recurrent disease.

I have been with my oncologist and medical team for so long, we are on a first-name basis, and their constant kindness and continual support have helped me overcome any lingering fear of what might lie ahead.

Despite all that I’ve endured, I know how fortunate I am, and I’m grateful for every day. Soon after my bone marrow transplant I learned that I was the only one of the seven of us on the transplant unit to survive the treatment.

Having cancer has given me the gift of courage, which I have passed down to my children, now 31, 29, and 27. Because I have been ill for most of their lives, I’ve instilled in my children the importance of finding happiness in whatever they choose to do and the confidence to pursue their dream. So profound was cancer on their lives, Kimberly became a cytotechnologist studying cancer cells, and my older daughter Beverly is a cancer researcher who recently received a Damon Runyon Cancer Fellowship Award.

Perhaps Beverly’s research will result in breakthroughs that protect other mothers, fathers, and children from this dreaded and unforgiving disease.

I know sometimes the world can be a depressing place, but having cancer has taught me how precious life is and the importance of making a contribution to the happiness of others.