Taking Charge of Your Care 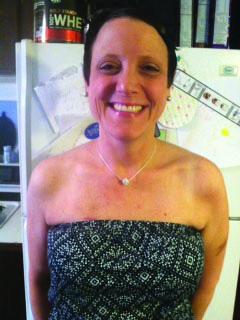 The first sign I had that something might be wrong was an uncontrollable itch all over my body. Although I had never had anything like that before, the problem was easy to initially dismiss. I’m a respiratory therapist and visit patients in their homes daily, so I chalked up the itchiness to an allergen I had come in contact with while treating a patient.

By the next week, I noticed that both my urine and stool were a different color and had a strange odor, but I didn’t think any of these symptoms were related and, again, dismissed them. By the third week, I had stomach pains that were so severe they kept me in bed for a couple of days.

Two weeks later my eyes and skin were jaundiced, and I knew something was very wrong. I made a trip to the emergency room, and the images from a series of tests, including an abdominal ultrasound and an endoscopy, showed that I had a mass the size of a tennis ball on my pancreas.

The doctor said there was so much damage to the organ it looked like the pancreas of a 60-year-old alcoholic. I’m only 41, a nonsmoker, and rarely drink, and I’ve never had stomach problems or pancreatitis, so getting this news was especially shocking.

What came next was even scarier. A tissue biopsy of the tumor was negative for a malignancy, but the doctor said he didn’t trust the test results and felt certain that I had pancreatic cancer. Because the pancreas was so inflamed, the doctor said he wanted to wait a month to do another biopsy and then start treatment if it was cancer.

If this really was pancreatic cancer, I knew I didn’t have the luxury of waiting another month, so I sought a second opinion. Again I ran into delays. Even though I have good health insurance coverage, two medical institutions turned me away because they didn’t accept my plan, and I had to travel from my home in Illinois to Missouri to see an oncologist.

I was finally given the devastating diagnosis of stage III adenocarcinoma of the pancreas. I was prescribed a cocktail of chemotherapies to shrink the tumor prior to having Whipple surgery. But because the cancer was blocking my bile duct, enlarging my gallbladder and causing it to malfunction, I couldn’t tolerate the full course of the chemotherapy and had to be hospitalized seven times for infections.

Finally, a stent was placed in the bile duct to keep it open, and I was able to complete the course of chemotherapy and have the surgery.

After finishing adjuvant chemotherapy with gemcitabine (Gemzar) in March, I am now cancer-free, but I’m still reeling from the physical, emotional, and financial ramifications of having pancreatic cancer.

My illness had a profound effect on my teenage son, and we’re still working through the emotional toll it has taken on him. I had to quit my job when I became ill, and have just started a new one, so overcoming the financial burden of having cancer has been difficult as well. And because of the surgery and all the damage to my gallbladder and liver, I’ve had to change my diet to accommodate a modified digestive system.

Despite these challenges, I know how lucky I am. The chances of surviving advanced pancreatic cancer are slim, and I’m grateful just to be alive, to go about the normal activities of my day, and, most of all, to take care of my son.

Throughout this whole experience, I stayed positive and took control of my life and health care. It’s that attitude that keeps me moving forward now. I was fortunate to have an oncologist who not only treated my cancer but also related to me on a personal level and included me in all the decision-making in my care.

She told me she was in this fight with me and said to ask questions if there was anything I didn’t understand. I felt like I was part of the medical team and that my input was as important as that of the other members on the team. That helped raise my spirit and gave me confidence that I could overcome the odds.

Having cancer has taught me that no one is immune from this disease. You can be young, vigilant about your health, do all the right things, and still get cancer. What really matters is how you deal with the aftermath of the diagnosis.

I know that for me, staying positive and being my own health advocate were key to my survival.