Creating Through Cancer: An Interview With Writer and Actress Amy Grantham 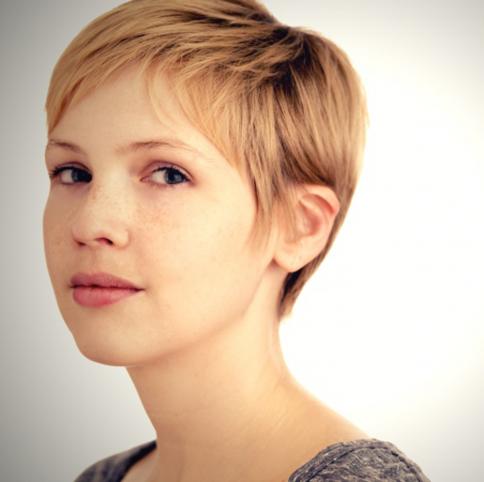 After being diagnosed with breast cancer at age 31, Amy Grantham began blogging about her experiences. Last year, her film Lily, which she co-wrote and starred in, debuted at the Tribeca Film Festival. This film chronicles the challenges one young woman faces as she nears the end of her cancer treatment and transitions back into “normal” life.

I recently had the opportunity to talk with Amy over the phone about her cancer experience and about how writing helped her cope with both treatment and the transition into survivorship.

Amber: Could you tell me a little about your cancer experience? How were you diagnosed? What was your reaction?

Amy: I actually found the lump myself when I was doing an examination at home. And in a way, I wasn't completely surprised, as strange as that sounds, because I have a family history with it. So, I was kind of hyper-aware of something possibly coming up.

I had a lumpectomy, and then I had to have a re-excision. I had chemo, radiation—so the whole nine yards. It was funny because my oncologist and I had a running joke where I would get one particular medication or treatment, and she's like, "Well, you know, there are these possible side effects, but that doesn't really happen." And then of course, it would happen to me. I was like, "From now on, don't say what could possibly happen because it probably will."

Amber: You said that you were "hyper-aware" because of your family history. What was it like to live with that feeling and then have it come true?

Amy: I think it's good to have that awareness. I kind of wish that more people would take the knowledge that they have about their family history and then be a little more proactive in taking care of themselves. I have spoken to a lot of people that will say: "Oh, you know, my mom had it too" or an aunt or whoever, but they are not really checking themselves or paying attention to things that change in their bodies. So, I think knowledge is a wonderful thing to have. In a way, even though it's a little daunting to have a family history like that, it's also something that's a good thing to have because it made me take charge of my health a little bit more.

And honestly, it's what helped me catch it so early, which is a very good thing.

Amber: So, how did your friends and family react to your diagnosis?

Amy: It's not an easy thing to say to people. That's not a fun phone call to make—multiple times. But I had a few key people I wanted to tell that day, and I was kind of taken off guard because a lot of the people that I called started crying. And I don't know why that was such a surprise to me, that everyone would be so upset. But, for the most part, everyone was super supportive. I had a really good circle of friends around me here in the city [New York], which was important.

Amber: How did blogging and writing help you cope during this period of your life?

Amy: It was kind of everything for me during that time. At first I started the blog because I thought: Ok, well, it's really difficult to, say, go to the doctor in the morning and find out all of this information about a surgery coming up and then have to relay that to maybe six or seven people when I haven't even totally digested it myself. So I thought if I just start writing everything down in this one place, people can go check on it.

I'll update it every day, and then if they have questions from there they can just call me. But then I noticed that people I didn't know started following the blog. And then people started writing me about their own experiences or friends and family members they knew who had cancer as well. And it really evolved into this very nice network of support for me while I was going through treatment. If you look through the blog, there's just all of these messages from complete strangers wishing me well and being really supportive and loving. It was a very nice and touching thing to see.

Amber: How did you then transition from blogging into writing the film?

Amy: Well that came about because there's a coffee shop here in New York that I was going to quite a bit, and I would see my friend Matt Creed there all the time. And at the time I didn't know him that well. This was right after I had been diagnosed, and I told him about my blog, and he actually started reading it. Every time I saw him he had all of these great questions about a post that I had just written, and I could tell he was interested in what was going on. We talked a little, and he was like, "If you are ever interested, I think it'd be great to sit down and write maybe a short story, and I could film it." And we were all set to do that, and then I started chemo, which obviously [laughs] ended that one pretty quickly. But then when I was about to go through radiation treatment, I got back in touch with Matt, and we decided that it was time to just sit down and write a script. And it all just came out from there.

Amber: It seems like writing and shooting a film would be pretty exhausting for anyone to do. What was it like to do this while you were still going through treatment and transitioning into your recovery?

Amy: I think it was the absolute, most perfect thing for me to do in a weird way. When I was writing, I was still going through radiation. And Matt is actually one of the first people, besides my whole oncology team, who saw me without my wig. So that was a big deal. And then as far as shooting after that, it actually was very helpful for me because, like we talk about in Lily, there's that difficult period of transitioning back into real life. And so, to be able to have some of that initial space filled up with making the film was really great for me because it was yet another creative outlet I could kind of pour all of that into. So I think the timing was really perfect and helpful.

Amber: In the film, Lily says: “I feel like treatment was kind of the easy part.” Do you feel the same way?

Amy: I kind of did too, but what I mean by that is just that when you are going through something like treatment you have a certain period of time in your life mapped out a little bit. You think, well, here is the next year or so; here's what I'm doing this day and that day. And so when that suddenly ends and you've just got a normal day that you've gotta get back into, it's a strange time. All of a sudden you're thrust back into your life, but it's not the same life you had before you started treatment.

You've been through something obviously traumatic and huge, so it's a big change.

Amber: Why did you choose to focus on finishing treatment and not some other part of the cancer experience?

Amy: I really wanted to focus on that because I feel there's not much of a dialogue right now about how difficult that journey can be—getting back into your "normal" life again and being "normal." So I think it is an important conversation to have because it's nice to have support during that time as well.

Amber: Based on your experience, do you have any tips or advice about navigating this transition period?

Amy: The best thing I could say is go easy on yourself and remember what you've been through. I have a tendency within myself to think: Ok, well that's done, so it's time to move on. What's next? and not really give myself a second to just catch my breath. So I think it's a good thing to give yourself a little time to figure out what normal is now and then just take it from there one day at a time in little manageable chunks every day.

Also, I think something that's really important is to have some sort of an outlet. I think a creative outlet is really invaluable when you are going through something like this. For me, it was just a good way to take everything that was cluttering up my head that was really overwhelming and get it out and kind of clear space for some new things to come in. It's not everything, but it does help a little bit.

Amber: What role does cancer play in your life now?

Amy: It's going to always be a part of my life in a way because I actually do have [a BRCA2 mutation]. So in that regard, cancer is just kind of always there. My oncologist put it really nicely. She said, basically think of it as having a chronic disease—so just something that's going to be there. It's not something I dwell on, but I certainly think that it's given me a perspective on life that other people my age don't have and how short it can be and how very precious it is. As cliché as that sounds, it's really true.