Fighting for Henry: My Story of Cancer and Pregnancy 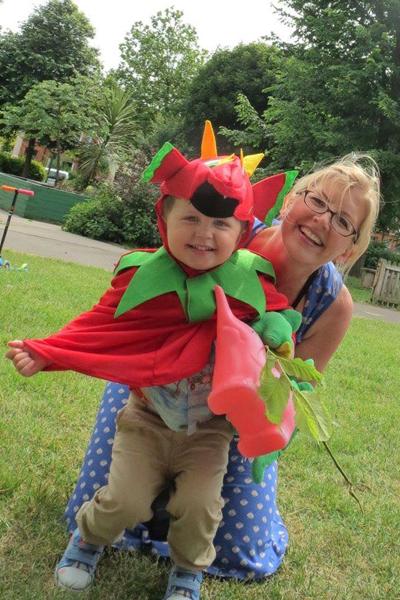 Lizzy Van Tromp is a mother of two who lives in Worthing, England.

I didn't routinely check my breasts and wasn't worried when I discovered a “dent” and dimpled area on the right side. Even when I had several biopsies taken, I never thought the worst. I'd had a harmless fatty lump investigated in the same breast in my mid-twenties. My mum assured me there was no history of cancer of any type in our family. And my mind was preoccupied with organizing the celebrations for our son Leo's third birthday.

As it turns out, June 28, 2014, was the last day I remember feeling completely happy and carefree, the day of Leo's party. It was glorious sunshine. We had a marquee and paddling pool set up in our local play park with lots of giggling 2 and 3 year olds. Surrounded by family, I had hope bubbling in my belly that in a few days’ time when we could start testing, we'd get a big fat positive (BFP) on our pregnancy test and know we'd be having a much wanted sibling for Leo. And we were blessed. July 3 we got our BFP, and we were over the moon. Life was good. We three would soon become four.

Our Brighton (England) flat was on the market so we could buy a family home with a garden in Worthing and have Leo registered for a school there by the January 2015 deadline. We had everything to look forward to. Then it all came crashing down less than two weeks later when I was diagnosed with stage III breast cancer. Ironically, the same day we got a great offer to purchase our flat.

I knew it was cancer as soon as they took my husband Nick and I into the room. It was the “bad news” room—painted in soft pastels with fresh flowers, tissues, and comfy chairs. I remember rocking and wailing as the surgeon’s words sunk in.

“What about my baby?!” I cried. I was only four or five weeks pregnant.

The surgeon advised having a termination, as there was a high chance that treatment would cause me to miscarry or would harm the baby.

It's impossible to describe my feelings at that moment—terror, devastation, fear for my unborn baby.

What would I tell my precious Leo? Would I see him grow up? I didn't want to die! I was so young. I looked to Nick, but he was in total shock. All I knew was I could not and would not end this pregnancy. And so, just three days later, I went into the hospital for a mastectomy and lymph node clearance. I never really had time to consider it or “mourn” losing a breast. I just wanted the cancer gone. Waking up after surgery, I cried and cried. I couldn't bear to look down at my chest for fear of what I'd see. But then my toddler Leo (who we'd hurriedly read the book Mummy's Lump to before I was admitted) came running into the hospital room asking: “Can I see where the doctor snipped your boobie off?” And I realized that life goes on, and I needed to pull myself together pretty quick.

A week or two later I sat with my oncologist to discuss the results of the tests they'd done on my tumor. He confirmed they'd removed a 5.3 cm tumor that was stage III, aggressive, and fast growing. Three of 26 lymph nodes that they removed were involved. They wanted to start chemo right away, and he reiterated the advice that I should have a termination of my pregnancy. But again I refused. And so began the long wait to get to 15 weeks gestation and safely into the second trimester so that I could commence the next stage of treatment. During this time I had an ultrasound scan every two weeks, which showed our baby was developing well, and at 14 weeks I met my wonderful obstetrician Tony, who would continue to track the baby's growth for the rest of my pregnancy. We were overjoyed at 18-and-a-half weeks and two chemo cycles in to learn that we were having another boy, a brother for Leo. So began the countdown to Henry's arrival. I won't lie. Chemotherapy was hard, especially when I switched from epirubicin and cyclophosphamide (EC) to docetaxel, but I honestly think pregnancy was a buffer against everything they were pumping in me. Plus my husband Nick had taken to preparing me a pint of homemade fruit and vegetable juice every day since my diagnosis, which (although hard to stomach!) gave an invaluable boost to my immune system. I read everything I could about cancer and nutrition/ lifestyle so that I was aware of the things I could control that would boost my health. Most importantly, I focused on loving my husband and children and on staying positive in order to kick cancer’s butt!

I had the last of six cycles of chemo on December 30, 2014, and just a month later, on January 30, 2015, our little warrior Henry entered the world, delivered by planned cesarean section at 34 weeks gestation. He spent two weeks in special baby care, needing support with breathing and feeding. Then on February 12, he was allowed to go home, and we four were reunited in our new family home, which we'd moved into a week before Henry's birth! Henry is thriving. He breastfeeds beautifully, and I have fallen in love with my one breast again by seeing how it can nourish and nurture another human being, something I'm so proud I can do even though it will only be for a few more weeks.

I began 15 sessions/ three weeks of radiation therapy on February 25, and then move on to 10 years of hormone therapy. The road ahead is long, but I'm almost through active treatment. I feel so incredibly blessed to be a mummy to my beautiful sons and a wife to my amazing husband who has been my rock throughout treatment.

Of course I have wobbles, every time someone loses their battle in my network of online “cancer buddies” from the charity Mummy's Star and the group Young Breast Cancer Network, I feel afraid for my future and whether I'll be around to see my sons become men. But then I remind myself to live for the moment and to love those most important to me with every part of my body and soul. No one knows what's around the corner, but I fully intend to grow old and gray with Nick and to become a grandma and a great grandma!

Cancer is my burden, not a death sentence.

Most importantly, it does NOT stop you from living and creating a life, as I have done with Henry. I really hope my story encourages other women to check their breasts regularly, and most importantly, I hope it gives hope and reassurance to those women diagnosed with cancer during pregnancy.

All images included in this post were taken and provided by Lesley Taylor.