Facing Cancer in a Time of War: Lama’s Story 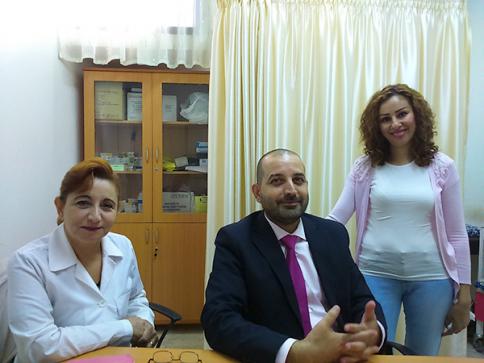 Dr. Maher Saifo, an oncologist practicing at Damascus University in Damascus, Syria, attended the ASCO Annual Meeting and talked with Cancer.Net staff about sharing how the Syrian war is affecting cancer care. In this blog post, he and his patient, Lama Yousef, tell their story of survival and hope against incredible odds.

A native of Syria, Maher Saifo, MD, received his medical degree from Damascus University, where he completed his residency and fellowship in medical oncology. He obtained his clinical and research postdoctorate degree in oncology at Roswell Park Cancer Institute in New York. He was appointed to faculty at Damascus University, Albairouni University Cancer Center, where he is a chairman of the Department of Oncology and a chief of the Breast Cancer Service.

Lama Meer Yousef is a Syrian citizen who received her license of English literature from Aleppo University in 2005. She has taught English language and has been working as a translator at the General Organization of Euphrates Dam (GOED) in Syria since 2008.

An introduction by Dr. Saifo

“To have cancer at any time, in any country, during any stage in your life is considered a disaster. But to have cancer in Syria, especially during the last 5 years, seems to be a catastrophic matter.”

That’s what Lama, a breast cancer survivor, said when I asked for her point of view on facing cancer during a time of war. The Syrian war started in March 2011 and has resulted in poor socioeconomic status, deterioration of medical services, and serious, life-threatening conditions. Indeed, this war has caused hundreds of thousands of deaths and injuries. We must include in that count those patients with cancer who could have been saved if only they were able to receive treatment.

As an oncologist, I try to reach out to others to share my view of the war’s impact on people with cancer and their suffering. Now, I’d like to share the patient’s view. Not only the suffering, but also the courage, strength, faith, and hope. Lama is a wonderful and unique person whom I met after her breast cancer diagnosis. Through her diagnosis, treatment, and survivorship, I came to better understand the experience of cancer survivors and their loved ones.

I hope that her Syrian journey of conquering breast cancer can be a light that guides other people with cancer.

Two years ago, I was a 32-year-old, married Syrian woman with 2 little girls, ages 3 and 5. It was at this period in my life that my story with cancer started. I had Paget's disease, a rare kind of breast cancer that begins in the ducts of the nipple. Women under 40 don’t often have this disease so it was a strong shock to me and my family.

I still remember that difficult moment when I went with my husband to the lab to get the biopsy results. I don’t know why, but I was sure that the lesion would be benign. At that time, I believed while some people may have cancer, it wouldn’t hit me and my family. When I read the report, I felt that there was a mistake. Then I heard the doctor talking about something wrong in the nipple. At that moment I became sure that I had cancer and started to feel dizzy.

The shock didn't last long. It took me an hour to control myself and start making decisions. I knew that to face cancer meant I had to accept it and start communicating with an oncologist I could trust. I also needed to get acquainted with all of the changes that would occur in my life during the treatment period and follow-up stage.

I underwent a lumpectomy on February 17, 2014, and started chemotherapy. I realized that the whole matter was not as simple as having a drug injected into my vein. First I needed to get to the cancer care center in Damascus, which was a real risk because of the war.

The cancer center is located in a war “hot spot” that has persistent fights. The city where I live is far from the center, about 200 kilometers [124 miles] away. We were obliged to use automobile transportation through various kinds of threats, such as explosions, kidnappings, and snipers. I still remember the first time I headed to the center — I saw an 18-year-old girl passing near us get shot in her head. I realized then that cancer doesn't cause death any more than a small bullet in the head.

I started to feel nervous 2 days before each chemotherapy session. This wasn’t because of the drug and its side effects, which I suffered from greatly; I was thinking a lot about the troubles we might face on the road to the cancer center.

At the center, we suffered from the crowd of patients in the room where I received the drug. A lot of people came from all over Syria to receive their therapy in the same center, which is not large enough to serve the great number of patients who needed care. I was always waiting for my turn for a vacant chair. We also suffered from the hot weather in the center because of the loss of air conditioning because of frequent power outages. Every time I had chemotherapy, we listened to the sounds of explosions and bombs that threatened our lives at every moment.

Fortunately, from the beginning I had Dr. Saifo. He was devoted to explaining all of the treatment steps and available choices. He always tried to ensure that all of his patients had the easiest and best possible circumstances during the treatment and follow-up period. I always felt comfortable to see him with the patients, in spite of all the dangers he faced to arrive at the center.

My wonderful family provided incredible support by taking care of my daughters when I travelled to receive my care. My husband was with me all the time. In every simple detail, during all treatment stages, he supported me and still does. This made me feel a big responsibility to face cancer and be determined to stay with my beloved family.

Today I continue my frequent cancer tests. I always have fears of recurrence, in addition to worries about the future of my sisters and daughters since breast cancer can be a familial illness. I hope they will not have the same experience.

However, cancer taught me to live every day happily and to do my daily activities with my family without thinking too hard about the future. You must think positively and consider cancer as any other illness — that way you can face it with strength and resolve.