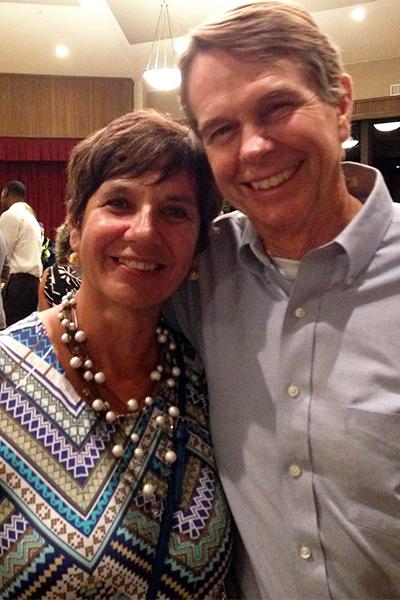 In the movie As Good as It Gets, Melvin (Jack Nicholson) accuses Carol (Helen Hunt) of evicting him from his life. That’s how it felt when I first heard that I was diagnosed with stage 4 melanoma. It was May 2016, and my wife, Elvira, and I were suddenly evicted from our lives and thrown into a strange new world filled not only with doctors, nurses, and blood draws, but also with confusion and fear.

Cancer was suddenly in control of our lives. It didn’t help when we saw the survival rates for melanoma when it had spread to organs throughout one’s body, as mine had. We had more scans, an MRI (magnetic resonance imaging), and a trip to the cancer center for a second opinion while the aggressive cancer continued to ravage my body and we dealt with paperwork and insurance claims.

A sense of empowerment

Our online research of melanoma yielded an interesting fact. A series of new treatments had gone through clinical trials and been approved by the U.S. Food and Drug Administration (FDA) for the treatment of metastatic melanoma. They were called immunotherapy drugs, and they were showing amazing results in certain people with melanoma, including former U.S. President Jimmy Carter. We had no idea whether I would benefit from these drugs or if my insurance would pay for them, but we kept hearing more about their successes in both clinical trials and the real world.

The moment I was approved for treatment with nivolumab (Opdivo) and ipilimumab (Yervoy) was when hope came alive for Elvira and me. We had never really lost hope, but we knew the odds were stacked against us. Now, we felt that I had a chance against this diagnosis.

Immunotherapy is so powerful because it does not fight the cancer directly. Instead, it prompts the patient’s own immune system to recognize and destroy the cancer cells. Once those drugs were coursing through my system, my immune system was actually doing the hard work. It was incredibly empowering to realize that my own body was no longer a bystander in my cancer treatment.

It was working with a singular purpose: to rid my body of cancer cells.

Of course, there were potential complications, or side effects. My first 4 sessions were combination treatments, where the 2 drugs were given 1 right after the other in a process that took 3 to 4 hours. Afterward, I would be exhausted, good for nothing but lying on the couch and staring at the TV—but that was OK. I had a rash that became itchier over time, but that was OK, too. So was the growing nausea that kept me from eating much. It was like we were in a boat, rowing against the tide, but if we kept rowing, if we did not give up, we were confident we would find calmer waters and maybe even land.

It was the third combination treatment that rocked our boat. The queasiness I had been experiencing turned into full-blown vomiting. Eating became a chore and not a pleasure. Soon, I stopped eating solid food because it came right back up. Elvira made chicken noodle soup, but I could not eat the chicken or the noodles. I sipped the broth, but even that would not stay down. Neither would Elvira’s high-protein smoothies.

The doctors monitored my condition. Even as I fell from 150 pounds to 120 pounds, my oncologist, Dr. A., assured me that my vital signs were good. Also, my epidermal tumors, including the baseball-sized one under my right arm, had disappeared. We were encouraged, but my weakness and weight loss concerned everyone. I had been to the emergency room 3 times and once ended up in the hospital to receive extended hydration.

Because immunotherapy is so new—and combination treatment is even newer—predicting the side effects for an individual patient is not easy. Despite my weakness and weight loss, my vital signs had remained stable, and the doctors were convinced I could withstand the fourth combination treatment.

These were uncharted waters for Elvira and me. We realized how important completing the regimen and having the fourth treatment was, but we also realized that even if the drugs worked exactly as they were intended to, I could die from the side effects.

They gave me the fourth treatment. By this time, I looked like a stick figure from a child’s drawing, but despite my appearance, we believed I was getting better. We hoped that the upcoming scans and MRI would prove that we, and the doctors, were right.

When the results of my CT scan came back a few weeks later, it showed tremendous progress. The melanoma in my brain and most other organs, as well as my back and lymph nodes, seemed to have disappeared. The masses on my kidney and liver were still there, but they were half the size of what they had been in my first scan. We were thrilled.

Ideally, 3 weeks after finishing my fourth combination treatment, I would have gone on a single-drug regimen. But after taking a good look at me, Dr. A. decided to put off more treatment. Instead, he prescribed prednisone to treat the nausea. He recommended a high daily dose that tapered off for more than a month. After that, he hoped I would be ready for more immunotherapy drugs.

A sense of hope…and luck

That’s how it played out. The prednisone had its own side effects for me, but nothing serious. The important thing was that it allowed me to start eating again. I was also getting acupuncture, which seemed to be helping as well. I had to start with easy-to-digest foods, but gradually I worked my way back to a fairly normal diet. When I met with my oncologist again, I had gained almost 10 pounds, and he was comfortable putting me back on the regimen.

That was more than 8 months ago. I've had 19 single-drug treatments since then and I feel better than I have at any time since I got sick. Elvira and I go on regular walks, play a round of par-3 golf every other week, and take bike rides. I eat whatever I like and occasionally have a glass of wine or a beer with dinner. My stamina isn't great, but I'm out there again and loving every minute of it.

My most recent CT and PET scans and MRI taken in June suggest that the nivolumab continues work. I have no new cancer spots. The cancer is still present on my kidney, but it continues to shrink. Elvira and I are always nervous before and during these tests. Of course, we always hope for the cancer to be gone completely, but 1 year after my first treatment, I am still here and feeling better all the time. That's enough for now.

We have hope, and I feel very lucky.