ASCO in the Community: Listening and Learning From the Experience of a Public Hospital in Queens, NY 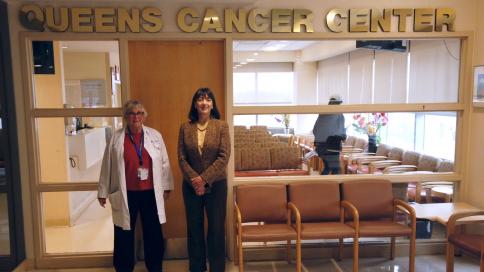 Margaret Kemeny, MD, is director of the Queens Cancer Center and a professor of surgery at Mt. Sinai School of Medicine in New York.

“Caring for every patient. Learning from every patient.” For ASCO President Dr. Monica Bertagnolli, this is more than just a presidential theme. To put action to words, she went out to local communities to speak with patients, caregivers, and oncology professionals. She and other ASCO members are responding to patients’ concerns and, at the same time, they are learning more about the challenges that exist in getting quality cancer care. These sessions were called “ASCO in the Community: Listening and Learning from Our Patients.” In March 2019, she visited Queens, New York.

What was your role during Dr. Bertagnolli’s visit to Queens Cancer Center?

Margaret Kemeny: Dr. Bertagnolli told me she was traveling around the country talking with doctors and patients, and I was thrilled when she said she wanted to come to Queens Cancer Center to hear directly from our staff and the community. I worked with Linda Bulone, RN, OCN, CCRC, director of clinical research, to arrange meetings with 5 of our patients and their oncologists. I know all these patients very well, and it was touching to hear them say they consider our staff to be family and that they have such a high level of trust that they’re getting the best possible care. We all got a little emotional.

Our team of oncologists, nurses, social workers, and our new psychologist also had an engaging and informative discussion over lunch with Dr. Bertagnolli about the challenges we face as a public hospital. These challenges include meeting the needs of a very diverse community, finding and retaining qualified staff for lower salaries than at private hospitals, covering the high cost of cancer treatments for patients without insurance, and caring for patients whose biggest problem might not be their cancer diagnosis but something else, such as worry about having food or housing for their families. In addition, our patients are diagnosed with late-stage disease at a frequency of 1.5 to 2 times the national average. The center sees approximately 2,000 new patients each year and, since 2002, has enrolled almost 1,000 patients on 87 clinical trials.

What is the cancer experience like in the area served by Queens Cancer Center?

MK: Queens is a borough of New York City that, by itself, ranks as the fifth largest city in the United States. It is also among the most diverse, with more than 60% of its 2.2 million residents belonging to minority groups and many different languages spoken throughout the borough.

Queens Hospital is 1 of the 11 hospitals that make up NYC Health + Hospitals, the largest public hospital system in the United States. Ninety-two percent of our patients are minorities. Many patients do not have insurance, and many are undocumented. Our mission is to deliver state-of-the-art cancer care to everyone regardless of their ability to pay, their socioeconomic status, or their immigration status.

Currently, 52% of Queens Hospital patients are covered by either Medicaid or Medicaid Managed Care plans, and 17% are uninsured.

I came to Queens Hospital in 2001 to establish a cancer treatment and research program. I saw the great need of this community and decided that I could use my experience as an administrator, clinician, and researcher to make it possible for these patients to be treated in their own community, where they would have a better chance for success.

The center is also bringing clinical trials to patients who might otherwise have no chance of enrolling. It’s unacceptable not to have the best clinical research available to everyone, particularly minority patients for whom we desperately need more data. I often use this quote from Martin Luther King, Jr.: "Of all the forms of inequality, injustice in health care is the most shocking and inhumane.”

To help both our patients and the hospital find necessary resources, I recruited 3 social workers and a financial advisor. We also have a patient navigator who makes sure that we don’t lose touch with the people who can’t get through the system on their own, and that’s most of them. Every new patient must meet with both a social worker and the patient navigator during their first visit. This establishes a relationship with a team member who then calls them the day before each scheduled visit to make sure that they remember and have a means of travel to their appointments. With 108 languages spoken by the hospital’s patients, these meetings and calls often require translators.

The center also has a therapy dog. Sometimes we see patients who are afraid or withdrawn, and even if they don’t want to interact with anyone, they will immediately take to the dog. With all the languages spoken among our patients and staff, the dog wordlessly bridges the gap and is a calming and soothing presence.

Shortly after the cancer center opened, we conducted an anonymous survey of clinic patients, asking if they ever either skipped medication doses to buy food or went without meals to buy medication. We found that 75% of clinic patients were identified as having food insecurity. In response, we added a food pantry, which is a huge benefit for many of our patients.

Queens Cancer Center and the surrounding community have a strong relationship. What are some of the results of the community outreach?

MK: Community outreach efforts through the cancer center have resulted in more people in Queens being screened with mammography, a decrease in the percentage of women diagnosed with late-stage breast cancer (from 33% in 2000 to 12% in 2018), more residents getting colonoscopies, and more people are being advised by their doctors to stop smoking and entering tobacco cessation programs.

To achieve these positive outcomes in the community, we partnered with the Queens Public Library and Memorial Sloan Kettering Cancer Center to create the Queens Library HealthLink. Cancer Action Councils were established in 20 library branches in the poorest communities; a Mammovan was purchased to offer screening at these library branches; outreach programs were conducted at schools, churches, and community centers; and translators were added to our education sessions. We also helped implement best practices for treating tobacco dependence in hospitals and health centers, and we conducted workshops for nursing students, HealthLink staff, school-based health centers, and Korean Community Services.

A version of this post was first published on ASCO Connection, May 7, 2019. ASCOConnection.org is the professional networking site for the American Society of Clinical Oncology (ASCO) and the companion website for ASCO’s official member magazine, ASCO Connection.