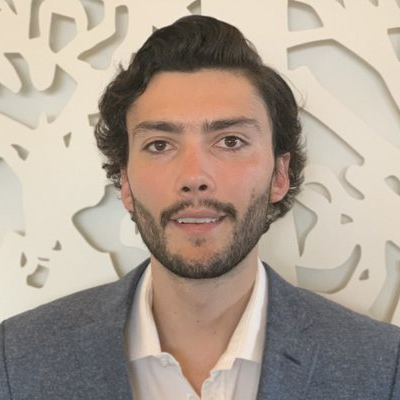 Andrés Nachón was diagnosed with Hodgkin lymphoma at age 17. Formerly an elite basketball player, he is now working toward becoming a cyclist. He is 8 years cancer-free.

I like to picture myself as a living miracle. Eight years ago, when I was 17 and a young student athlete playing basketball at IMG Academy in Florida, I was diagnosed with Hodgkin lymphoma. It was the summer, and my family was away on vacation. Meanwhile, I stayed back with my coaches and teammates doing preseason workouts at the beach.

During a basketball game at the time, I was fouled and thought I broke a rib. I had a computed tomography (CT) scan taken right after the game ended because I was in physical pain. When the doctors finally had the scan results in hand, they found there was nothing wrong with my ribcage. However, they did find a small mass they wanted to further analyze.

When those results came back, it hit me like a very cold bucket of water: I had cancer. After a couple of days, I managed to break the news to my family. They responded by rushing back from vacation to my side so we could all be together to fight as a team, as we always do.

When I was first diagnosed with cancer, I was shocked. Then, I felt fear. Later on, I found absolute peace when I realized it was not me who was in charge, but it was me who could decide how to live with cancer. After months of treatment that weakened my body, I managed to stay positive with the help of God, my family, and my inner strength. I knew I had 1 ticket out: basketball. So I decided to focus on that and wouldn’t let my mind have enough time to think about all that was going on in the hospital. My mind only had room for thinking about how I could improve here or there on the court. Five months after starting treatment, I was back on the basketball court, once again a kid with a dream to use basketball as a way of forming myself and those around me.

After surviving cancer, I had the opportunity to represent my beautiful country, Mexico, playing for the national U-16 and U-17 selections. I also played basketball in college. I am a record holder alongside my teammates for the most games won in a single season in Mexico’s Division 1 College Basketball (ABE), with 39 wins and 1 loss, and we won that season’s championship.

After 2 knee surgeries, my doctors advised me to stop playing competitive basketball. The ball stopped bouncing too soon for my liking. But recently, I have decided to give cycling a chance. I plan to use cycling as a way to show the world that no matter what comes your way, good or bad, it all adds up to helping you become who you are. I believe it is you and you alone who decides how to react to the circumstances happening in your life, whether that might be cancer, the loss of a job, or something else. After cancer, I decided that I was not going to stand in this world and let time fly by without acting. I decided to take whatever comes my way and find a way to help it turn me into a better version of myself.

I believe that teenagers and young adults living with cancer should have something that reminds them of where they stand in the world. For me, my faith in God helped me remain stable and confident in knowing that all things are possible. Basketball also helped me find purpose while living with cancer. For other young people in the same situation, it might be a brother or girlfriend who keeps them anchored. Whatever it is, I found that having someone or something in my life that wasn’t related to cancer helped me to keep the motor going.

Cancer completely made me who I am today. It changed my way of viewing the world. It helped me value what really is important in life and disregard the nonsense we sometimes get caught up in. I know that the clock never stops. We are just here for a short while and cannot change that. But having Hodgkin lymphoma as a teenager taught me that as long as there was some fight in me, then I could move mountains. It helped me understand that it is me who defines the odds or even sometimes goes against them. I hope that my story motivates others to do see the opportunities in their lives and to make something of those gifts. Get out there and embrace who you are.