Whipple Procedure for Pancreatic Cancer: How to Prepare and What to Expect 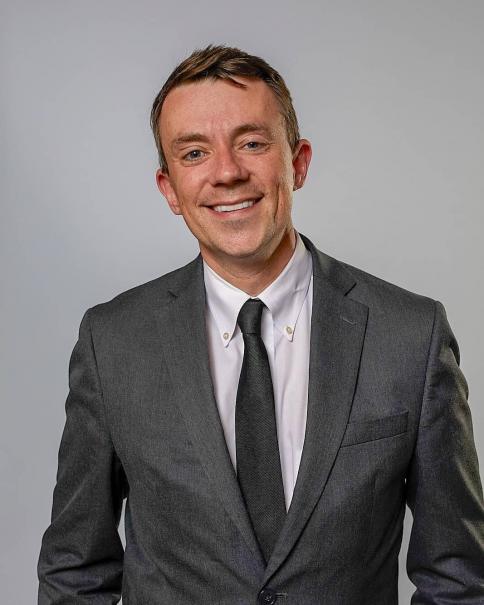 Mark A. Lewis is a medical oncologist and director of gastrointestinal oncology at Intermountain Healthcare, a multi-state and multi-disciplinary medical system based in Salt Lake City, Utah. During his training, Dr. Lewis diagnosed himself with pancreatic tumors and underwent the Whipple procedure in 2017, giving him firsthand knowledge of the operation. You can follow Dr. Lewis on Twitter. View Dr. Lewis’ disclosures.

The Whipple procedure, also called a pancreaticoduodenectomy, is a complicated operation in the upper abdomen that is named for the surgeon who pioneered the technique, Dr. Allen Whipple. It involves removal of the head of the pancreas, part of the adjacent small intestine called the duodenum, the common bile duct, and the gallbladder. Following their removal, the surgeon reconnects the remaining organs.

The Whipple procedure is almost always recommended for pancreatic cancer, which has 2 main types: adenocarcinoma and neuroendocrine tumors of the pancreas. It is sometimes also performed for cancers in the bile duct passing through the head of the pancreas and ending in the small intestine. Rarely, it is performed for an inflammatory condition called chronic pancreatitis. 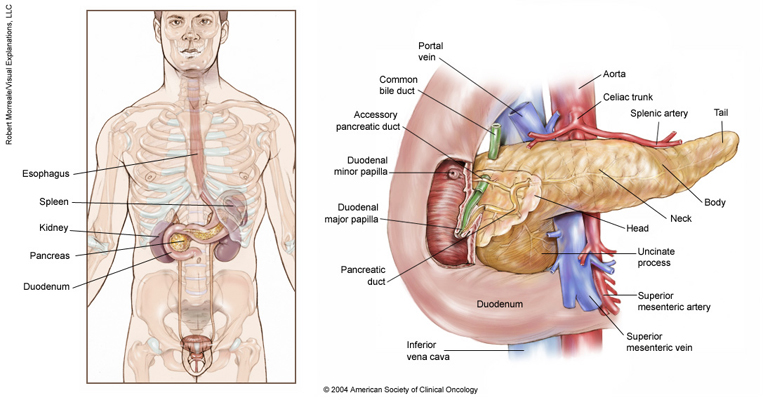 The pancreas is a pear-shaped gland located in the curve of the duodenum, which is the first section of the small intestine where it connects to the stomach. The pancreas is located behind and under the stomach, in the right side of the abdomen. The sections of the pancreas are the head, the neck, the body, and the narrow tail. Pancreatic ducts run through the pancreas and connect to the duodenum via the duodenal minor papilla. The large aorta and the portal vein run behind the pancreas. The celiac trunk branches off the aorta to bring blood to the pancreas, to the spleen, located on the left side of the abdomen, and to other parts of the body. The common bile duct also connects to the pancreas and runs through the pancreas to connect to the duodenum via the duodenal major papilla. Copyright 2004 American Society of Clinical Oncology. Robert Morreale/Visual Explanations, LLC.

My experience with the Whipple procedure

When I underwent the Whipple procedure to treat my pancreatic tumors in 2017, it was very physically challenging. This wasn’t so much because of the discomfort, but rather because of how much the procedure alters the normal upper gut anatomy and function.

My surgeon took great care not to cut my stomach (a variation on the procedure called a pylorus-preserving Whipple), but even though the structure of the organ was left intact, the muscles of my stomach stopped moving properly for weeks on end. It was almost as if my stomach was “stunned” by the removal of the adjacent pancreas. Because of this, I couldn’t eat normally, and I lost over 20 pounds. I had to be nourished through an intravenous (IV) tube for a month after the operation. Eventually, however, my stomach “woke up.” Since then, I have returned to a normal diet, enjoying an excellent quality of life for which I am extremely grateful!

How to prepare for the Whipple procedure

As the surgery profoundly changes the anatomy of the upper gut, it is often associated with a substantial amount of weight loss. Because of this, it is actually encouraged—if possible—for a person to gain weight prior to the operation.

Furthermore, the process of “prehab” to prepare for the surgery involves working to strengthen both the muscles of the abdominal wall and the hip flexors, the latter of which are important for walking. The more quickly a person can become mobile after the surgery, the lower their risk of complications following the operation, such as pneumonia, blood clots, or even bed sores.

What to expect during recovery from the Whipple procedure

The wound over the midline of the abdomen, which is where the surgeon makes the incision, can be numbed with the insertion of filaments under the skin that release a numbing chemical, such as lidocaine. Pain medicine can also be given intravenously in the hospital and may be continued in pill form at the physician’s recommendation upon their patient’s discharge. Talk with your doctor about what you can expect during your recovery from the Whipple procedure and what they recommend to help you manage pain.

How to know if the Whipple procedure worked

Your surgeon will have an immediate awareness in the operating room as to whether they were able to remove the tumor from the pancreatic head without leaving any cancer behind. Given the complex intersection of structures in the area being operated on, especially the blood vessels coursing around the pancreas, it is not always possible to remove a cancerous tumor from surrounding arteries and veins.

Any tissue removed during the Whipple procedure is then sent to the pathology lab for a meticulous examination under the microscope by a pathologist, which is a doctor who specializes in interpreting laboratory tests and evaluating cells, tissues, and organs to diagnose disease. The pathologist pays particular attention to the margins, or borders, of the tissue to ensure that there are no cancerous cells at the edges of the specimen. This process can be extremely painstaking, and it can take days before the final report is issued.

Finally, the person who underwent the Whipple procedure typically goes to a follow-up visit after their discharge from the hospital. The doctor will first ensure they are healing and recovering adequately. Later, the person will have another follow-up visit to ensure the cancer has not come back. This surveillance process can last for years. Sometimes, chemotherapy can be considered following the operation to reduce the risk of the cancer returning.

Life after the Whipple procedure

I would tell anyone preparing for the Whipple procedure that it is a life-changing—but potentially life-saving—procedure. It is also a good idea to ask your surgeon about their past experience performing the operation to better understand the most likely outcomes and complication rates at their specific practice and hospital.

Remember that the pancreas is an endocrine and an exocrine organ, so it produces both hormones and digestive enzymes. Because of this, the Whipple procedure may cause certain long-term issues, including post-operative diabetes. Your surgeon can estimate the possibility of post-operative diabetes and can engage the help of an endocrinologist, which is a doctor who specializes in treatment of the endocrine system, accordingly. They may also prescribe medicines that help with the breakdown of dietary fats and proteins if there is difficulty with digesting or absorbing these nutrients after surgery.

Lastly, I would observe that the “Whipple club” is a vibrant community of people who have been through the surgery and are often willing to share their perspective, realizing that the process will be slightly different for everyone. Let’s Win! Pancreatic Cancer, an affiliate of the Lustgarten Foundation, may be a good starting point, as is the #pancsm hashtag on Twitter. I encourage you to reach out to members of the “Whipple club,” and remember you are never alone as you prepare for the operation.