Can Eating Soy Cause Breast Cancer? 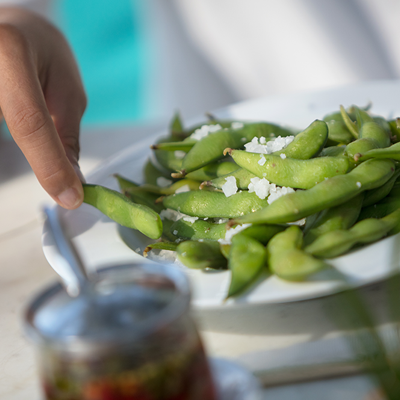 There is no shortage of claims on the internet that certain foods can cause cancer. For example, you may have read or heard the myth that eating soy can increase your risk for breast cancer. But is it actually true? Here, we discuss where this idea comes from, what the science says about soy and cancer risk, and what to know about incorporating soy into your diet.

Soy is a protein found naturally in legumes such as soybeans and edamame. You can also find soy in tofu, soy milk, soy sauce, miso, tempeh, and other foods.

Soy contains estrogen-like chemicals called isoflavones. They are called phytoestrogens because they come from plants. This similarity to estrogen is why people mistakenly believe eating soy is related to breast cancer risk. As humans, our bodies have a different type of estrogen. Estrogen is a hormone that impacts several functions within the body, such as sexual development, pregnancy, childbirth, and menopause. Females, in particular, have higher levels of estrogen to help regulate their reproductive system and other systems within the body.

Can eating soy increase your risk of breast cancer?

Some types of cancer, such as hormone receptor-positive breast cancer, use human estrogen to grow and spread. Because of this, some people may worry that eating the phytoestrogens found in soy could increase estrogen in their bodies and encourage breast cancer growth.

However, no studies in people have shown a link between eating soy and having breast cancer. Studies done in the laboratory have shown that isoflavone enhanced the growth of breast cancer cells and promoted breast cancer tumors in rats. However, these studies were not done in people, and laboratory studies are not used to make dietary recommendations for people. Researchers have also discovered that rats metabolize soy differently than humans do.

Some studies suggest that soy may help protect against breast cancer, but more research is needed to prove this. For example, a 2014 meta-analysis of multiple studies in the journal PLOS ONE found that soy was marginally protective against breast cancer in postmenopausal people from Western countries. Meanwhile, 2 separate studies from 2009 also found that soy helped protect against breast cancer. In a study published in the Journal of the American Medical Association (JAMA), 5,000 breast cancer survivors who were part of the Shanghai Breast Cancer Survival Study and who ate soy had a lower risk for death and cancer recurrence. Furthermore, in a study published in the American Journal of Clinical Nutrition, roughly 73,000 Chinese women who were part of the Shanghai Women’s Health Study and who reported consuming high levels of soy consistently during adolescence and adulthood had a substantially lower risk of breast cancer.

“Scientific data suggests that consuming soy foods as part of a diet with lots of other plants is a great way for breast cancer survivors to care for their bodies. However, if you're not comfortable including soy foods, survivors can have a perfectly healthy diet that does not include soy foods.” – Julie LG Lanford, MPH, RD, CSO, LDN, registered dietitian and nutritionist with 15 years of experience working in oncology nutrition

How much and what type of soy should you eat?

It is best to eat soy in moderation as part of healthful meals that include plenty of vegetables, fruits, and whole grains. You can find natural sources of soy in foods like edamame, soy milk, and tofu. The U.S. Food and Drug Administration says that eating 25 grams of soy per day offers health benefits, such as reducing the risk of heart disease.

“People who are making lifestyle changes after a cancer diagnosis often start eating more fruits and vegetables and consume less red meat and processed foods. The question of whether it is OK to eat soy comes up often, especially for patients with hormone receptor-positive breast cancer. The good news is it appears that patients do not need to avoid soy in their diets, although it is best to limit intake to moderate amounts.” – Norah Lynn Henry, MD, PhD, FASCO, an Associate Professor in the University of Michigan's Division of Hematology/Oncology in the Department of Internal Medicine, Breast Oncology Disease Lead at the Rogel Cancer Center, and Cancer.Net Associate Editor in Breast Cancer

You may have also heard of soy protein powder, which can be added to shakes or used while baking to boost the amount of protein. Read the nutrition label on soy protein powders to find the total grams of soy in each serving to ensure you stay within the recommended 25 grams. You should also look at the label to choose products with lower sodium, fewer added sugars, and fewer additional ingredients.

In addition, isoflavone supplements are available at natural health stores and online. However, be cautious when purchasing these supplements, and always talk with your doctor before starting a new supplement. Soy supplements have higher amounts of soy than what is found in traditional Asian diets, which is also generally higher in soy than American and European diets. Further research is needed on isoflavone supplements and what should be the recommended daily allowance, if any, for people with or without cancer. Ask your doctor about the risks and benefits if you’re considering taking isoflavone or any other dietary supplements.