Can Having Solar Panels or Living Near a Solar Farm Increase Your Cancer Risk? 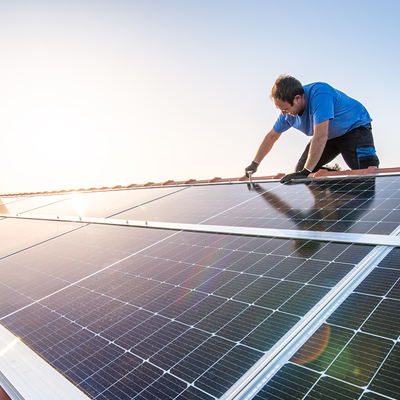 Solar energy continues to grow in the United States and worldwide. In fact, in the last decade, solar energy has grown at an annual rate of 42% due to cheaper installation costs and a demand for renewable energy, according to the Solar Energy Industries Association. As solar energy becomes more commonplace in our lives, you may have questions about this energy source. Some people wonder whether the technology used to build or operate solar panels and solar farms carries an increased risk for cancer.

How is solar energy harnessed by solar panels and solar farms?

You have likely seen a type of solar technology called photovoltaic (PV) technology. It is used in the solar panels that you see on the roofs of homes or businesses, or as part of larger solar farms. As the sun emits solar radiation, PV technology uses cells to absorb that radiation and turn it into electricity. That electricity can then be stored in batteries or fed back to the power grid.

Can solar panels or living near a solar farm cause cancer?

“There is no evidence that solar panels are causing cancer,” says Noah Kittner, PhD, assistant professor in the department of environmental sciences and engineering at the Gillings School of Global Public Health at the University of North Carolina. In fact, adds Dr. Kittner, solar panels and solar farms may actually be a beneficial strategy to reduce the risk of lung cancer overall. “In many cases, they’re offsetting other electricity-generating sources that can contribute to air pollution, which can cause [lung] cancer.”

Lung cancer is the leading cause of death from cancer, accounting for 25% of cancer deaths, according to the American Cancer Society. Globally, 14% of all lung cancers are attributable to air pollution, according to data reported by Christine Berg, MD, of the National Cancer Institute at the International Association for the Study of Lung Cancer 2021 World Conference on Lung Cancer. And, in 2019, electricity production accounted for 25% of greenhouse gas emissions in the United States, according to the United States Environmental Protection Agency.

“As the nation begins to think green and look for sustainable energy sources, there is growing interest in solar energy. While research continues to evaluate newer panel technologies, solar panels have not been shown to cause cancer.” – Karen Winkfield, MD, PhD, board-certified radiation oncologist and Ingram Professor of Cancer Research at the Vanderbilt-Ingram Cancer Center and 2022 Cancer.Net Associate Editor for Radiation Oncology & Health Equity

Most solar panels are largely made of glass and an aluminum frame, along with other commonly used plastic and wires. Furthermore, the cells on solar panels that are used to capture sunlight are made of silicon, which is a naturally occurring element.

While solar panels may contain small amounts of hazardous materials, Dr. Kittner notes these materials are self-contained. “They’re used in the panel itself, so the risk is minimal,” says Dr. Kittner, adding that most people do not have direct contact with solar panels even if they are mounted on the roof of their house.

However, disposing of old solar panels or those damaged during storms in a safe and environmentally friendly way is a critical issue for communities, researchers, manufacturers, and policymakers alike. Researchers at the National Renewable Energy Laboratory outlined the most promising approaches to recycling solar panels in a 2020 study in Nature Energy.

Can the radiation from solar panels increase cancer risk?

Other agencies, like the European Commission Scientific Committee on Emerging and Newly Identifiable Health Risks, take a more cautious stance. They say that it’s possible, but far from conclusive, that extremely low-frequency magnetic fields could be carcinogenic, or have the potential to cause cancer, according to a 2015 report. In the same report, the committee notes that studies of magnetic fields generated by roof-mounted solar panels are scarce and that no conclusions can be drawn.

How can I learn more about solar power?

The U.S. Department of Energy’s website extensively covers resources and information on solar technology, and the National Renewable Energy Laboratory’s website also provides an introduction to solar energy. If you want to learn more about electromagnetic fields and cancer, visit the National Cancer Institute’s website.