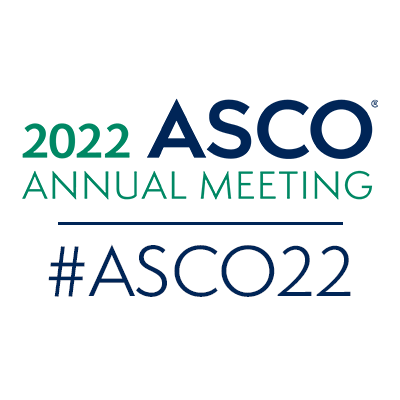 Who does this study affect? People with metastatic breast cancer that has low HER2 expression levels and has been treated with 1 or 2 types of chemotherapy.

What did this study find? Results from the DESTINY-Breast04 phase III clinical trial show that treatment with trastuzumab deruxtecan (Enhertu), when compared to standard-of-care chemotherapy, doubles progression-free survival among people with metastatic breast cancer that expresses low levels of HER2. The treatment also lengthens life for patients, regardless of hormone receptor status. This clinical trial also identified a new subset of metastatic breast cancer, called HER2-low, that can be effectively treated.

In this study, researchers wanted to know whether a targeted therapy treatment called trastuzumab deruxtecan could help patients with HER2-low breast cancer. Trastuzumab deruxtecan is a type of drug called an antibody drug conjugate or ADC. ADCs are drug combinations that work together to treat cancer. Trastuzumab targets the HER2 protein. Deruxtecan is a type of drug that targets a specific enzyme to kill cancer cells. This drug is already approved for the treatment of HER2-positive metastatic breast cancer after treatment with 2 or more HER2-targeted therapies.

There were fewer serious side effects among those who received trastuzumab deruxtecan, but some did develop serious lung problems.

What does this mean for patients? Metastatic breast cancer that expresses low levels of HER2 may also be effectively treated with trastuzumab deruxtecan, compared with standard chemotherapy.

"Our study shows that trastuzumab deruxtecan may be a new and highly effective targeted therapy option available for this newly defined patient population. It is important for patients to know what level of HER2 their cancer expresses, not just whether it’s positive or negative, especially as HER2-low status can be determined using commonly available tests.”

Who does this study affect? People with RAS wild-type metastatic colorectal cancer.

What did this study find? This phase III PARADIGM clinical trial found that combining the targeted therapy drug panitumumab (Vectibix) with standard chemotherapy as a first-line treatment helped people with metastatic RAS wild-type colorectal cancer live longer. Metastasis means that the cancer has spread to distant parts of the body. Wild-type means that there is not a mutation in the cancer’s RAS gene.

Colorectal cancer is the third most common cancer diagnosed in both men and women worldwide. When colorectal cancer has spread to distant parts of the body (metastasized), the 5-year-survival rate is 15%, and about 22% of patients are diagnosed at this stage. It has been 10 years since a new drug has shown an improvement over the current standard of care for metastatic colorectal cancer that does not have a RAS mutation.

This study compared the targeted therapy drugs panitumumab and bevacizumab (Avastin). Panitumumab targets the epidermal growth factor receptor (EGFR), and bevacizumab targets the vascular endothelial growth factor (VEGF) receptor. In addition to one of the targeted therapy drugs, every participant in this study received the current standard chemotherapy treatment, which is a combination of drugs called modified FOLFOX6 (mFOLFOX6). This drug combination includes folinic acid (leucovorin), fluorouracil (5-FU), and oxaliplatin (Eloxatin). The study included 823 people who had RAS wild-type metastatic colorectal cancer that had not been treated with chemotherapy. They were randomly divided into 2 groups: 400 participants received panitumumab plus mFOLFOX6 and 402 participants received bevacizumab plus mFOLFOX6. There were 21 patients who did not continue with the study. 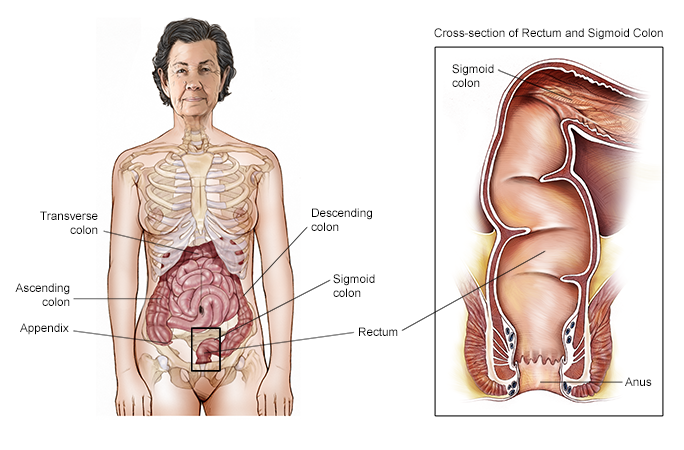 This illustration shows the 5 sections of the colon and rectum. The ascending colon is the beginning the large intestine into which the small intestine empties; it begins on the lower right side of the abdomen and then leads up to the transverse colon. The transverse colon crosses the top of the abdomen from right to left, leading to the descending colon, which takes waste down the left side. Finally, the sigmoid colon at the bottom takes waste a few more inches, down to the rectum. A cross-section of the rectum and sigmoid colon shows where waste leaves the body, through the anus.

The researchers’ main focus was on overall survival, which is how long people diagnosed with the disease are alive after treatment. Panitumumab improved overall survival for all study participants, and people with left-sided tumors had an 18% lower risk of death if they received panitumumab.

For people with left-sided tumors, the median overall survival rates were:

Among all study participants, the median overall survival rates were:

What does this mean for patients? The standard of care for RAS wild-type colorectal cancer has not changed in 10 years. Panitumumab plus mFOLFOX6, especially for left-sided tumors, appears to be an effective first-line treatment for people with RAS wild-type metastatic colorectal cancer. This study also shows the importance of genetic testing and tumor location for determining treatment options for these patients.

"This trial demonstrates that if gene testing shows that a tumor is a RAS wild-type, the choice of initial treatment with panitumumab with mFOLFOX6 chemotherapy is superior to initial treatment with bevacizumab with mFOLFOX6 chemotherapy for those people with left-sided tumors. It has long been believed that the sequence of metastatic colorectal cancer treatment does not matter as long as patients had access to the drugs at some point, which has now been disproven.”

Who does this study affect? People with Ewing sarcoma that comes back after treatment (recurrent) or that was not stopped by initial treatments (refractory).

This is the first randomized trial to compare chemotherapy treatments for people with this diagnosis. The study participants ranged from ages 4 to 49, and the median age was 19 years old. The first phase of this study included 451 patients who were randomly chosen to receive 1 of 4 common chemotherapy regimens: topotecan (Hycamtin) plus cyclophosphamide (available as a generic drug), irinotecan (Camptosar) plus temolozomide (Temodar), gemcitabine (Gemzar) plus docetaxel (Taxotere), or high-dose ifosfamide. After early assessments, the combinations of irinotecan plus temolozomide and gemcitabine plus docetaxel were found to be less effective at treating the Ewing sarcoma and were removed from the study.

After a median follow-up of 40 months, researchers analyzed event-free survival, which is the amount of time after treatment ends that the cancer does not come back or get worse. For high-dose ifosfamide, event-free survival was 5.7 months. For the combination of topotecan and cyclophosphamide, it was 3.7 months.

The researchers also analyzed overall survival for both groups. For high-dose ifosfamide, overall survival was 16.8 months. For the combination of topotecan and cyclophosphamide, it was 10.4 months.

The most common serious side effects of both treatments included neutropenia, infections, vomiting, nausea, diarrhea, problems with brain function or structure, and kidney problems. When researchers looked at quality of life, they found that young patients who received ifosfamide had better quality of life than those who received the combination of topotecan and cyclophosphamide. For adults, no difference in quality of life was seen between the treatments.

What does this mean for patients? For people with Ewing sarcoma that has come back or that was not stopped by initial treatments, high-dose ifosfamide lengthens life when compared to other current chemotherapy regimens.

"The rEECur study has, for the first time, accrued randomized data for 4 widely used chemotherapy regimens and is now accruing data for a fifth regimen. Before the rEECur study, the basis for choosing drugs for patients with relapsed or refractory Ewing sarcoma was weak and lacking randomized trials to inform clinicians or patients about which treatments were most effective and/or most toxic.”

Who does this study affect? People who have been recently diagnosed with multiple myeloma.

What did this study find? The phase III DETERMINATION clinical trial found that including an autologous bone marrow/stem cell transplant early in the treatment plan for younger people with newly diagnosed multiple myeloma significantly improved progression-free survival. Progression-free survival is the amount of time during and after treatment that the cancer does not grow or spread further.

Multiple myeloma is a blood cancer that affects the plasma cells in the bone marrow. Bone marrow is the spongy tissue inside bones that creates different types of blood cells, including plasma cells. Plasma cells produce antibodies to help the body fight infection and they are an important part of the immune system. Multiple myeloma is most commonly diagnosed in people older than 60 and the median age at diagnosis is 70 years old.

The 722 participants in this study had newly diagnosed multiple myeloma and ranged in age from 18 to 65 years. They were randomly divided into 2 treatment arms, or groups.

"The findings from DETERMINATION will have importance for real-world practice and the treatment of younger patients with multiple myeloma by informing providers and patients alike of the important considerations to be made in selecting treatment options in the newly diagnosed, transplant-eligible setting, as well as important implications for future research.”