Approved by the Cancer.Net Editorial Board, 05/2022

ON THIS PAGE: You will learn about how doctors describe a cancer’s growth or spread. This is called the stage. Use the menu to see other pages.

What is cancer staging?

Doctors use diagnostic tests to find out the cancer's stage, so staging may not be complete until all of the tests are finished. Knowing the stage helps the doctor recommend the best kind of treatment, and it can help predict a patient's prognosis, which is the chance of recovery. There are different stage descriptions for different types of cancer.

The results are combined to determine the stage of cancer for each person.

There are 5 stages: stage 0 (zero) and stages I through IV (1 through 4). The stage provides a common way of describing the cancer, so doctors can work together to plan the best treatments.

Here are more details on each part of the TNM system for colorectal cancer:

Using the TNM system, the "T" plus a letter or number (0 to 4) is used to describe how deeply the primary tumor has grown into the bowel lining. Stage may also be divided into smaller groups that help describe the tumor in even more detail. Specific tumor information is listed below.

T0 (T zero): There is no evidence of cancer in the colon or rectum.

Tis: Refers to carcinoma in situ (also called cancer in situ). Cancer cells are found only in the epithelium or lamina propria, which are the top layers lining the inside of the colon or rectum.

T1: The tumor has grown into the submucosa, which is the layer of tissue underneath the mucosa or lining of the colon.

T2: The tumor has grown into the muscularis propria, a deeper, thick layer of muscle that contracts to force along the contents of the intestines.

T3: The tumor has grown through the muscularis propria and into the subserosa, which is a thin layer of connective tissue beneath the outer layer of some parts of the large intestine, or it has grown into tissues surrounding the colon or rectum.

T4a: The tumor has grown into the surface of the visceral peritoneum, which means it has grown through all layers of the colon.

T4b: The tumor has grown into or has attached to other organs or structures.

The "N" in the TNM system stands for lymph nodes. The lymph nodes are small, bean-shaped organs located throughout the body. Lymph nodes help the body fight infections as part of the immune system. Lymph nodes near the colon and rectum are called regional lymph nodes. All others are distant lymph nodes that are found in other parts of the body.

N0 (N zero): There is no spread to regional lymph nodes.

N1a: There are tumor cells found in 1 regional lymph node.

N1b: There are tumor cells found in 2 or 3 regional lymph nodes.

N1c: There are nodules made up of tumor cells found in the structures near the colon that do not appear to be lymph nodes.

N2a: There are tumor cells found in 4 to 6 regional lymph nodes.

N2b: There are tumor cells found in 7 or more regional lymph nodes.

The "M" in the TNM system describes cancer that has spread to other parts of the body, such as the liver or lungs. This is called metastasis.

M0 (M zero): The disease has not spread to a distant part of the body.

M1a: The cancer has spread to 1 other part of the body beyond the colon or rectum.

M1b: The cancer has spread to more than 1 part of the body other than the colon or rectum.

M1c: The cancer has spread to the peritoneal surface.

Doctors also describe colorectal cancer by its grade (G). The grade describes how much cancer cells look like healthy cells when viewed under a microscope.

Doctors combine the T, N, and M information (see above) to say what stage the cancer is.

Stage 0: This is called cancer in situ. The cancer cells are only in the mucosa, or the inner lining, of the colon or rectum. 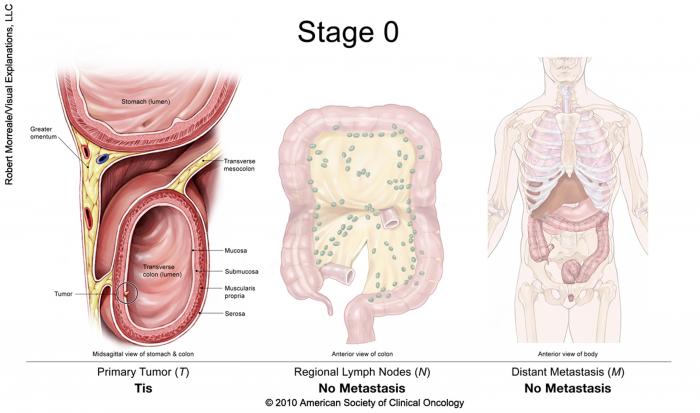 Stage I: The cancer has grown through the mucosa and has invaded the muscular layer of the colon or rectum. It has not spread into nearby tissue or lymph nodes (T1 or T2, N0, M0). 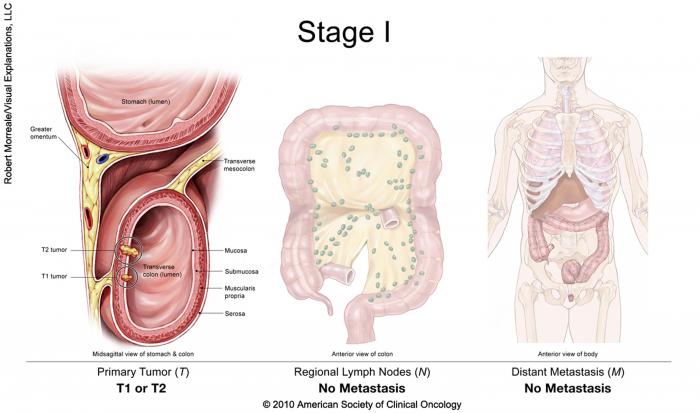 Stage IIA: The cancer has grown through the wall of the colon or rectum but has not spread to nearby tissue or to the nearby lymph nodes (T3, N0, M0). 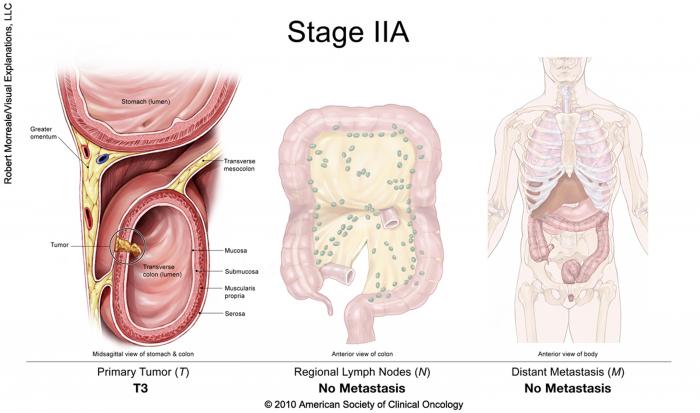 Stage IIB: The cancer has grown through the layers of the muscle to the lining of the abdomen, called the visceral peritoneum. It has not spread to the nearby lymph nodes or elsewhere (T4a, N0, M0). 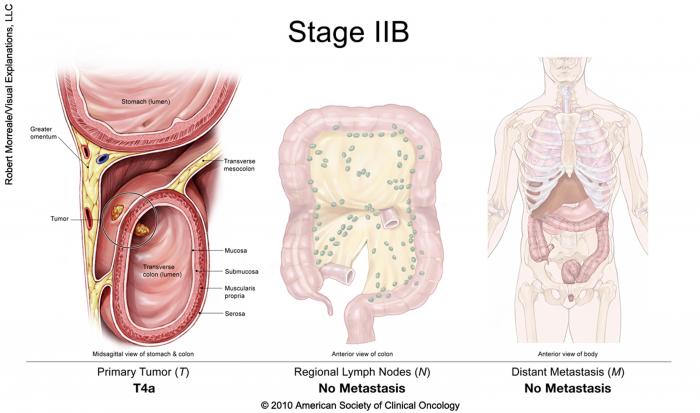 Stage IIC: The tumor has spread through the wall of the colon or rectum and has grown into nearby structures. It has not spread to the nearby lymph nodes or elsewhere (T4b, N0, M0). 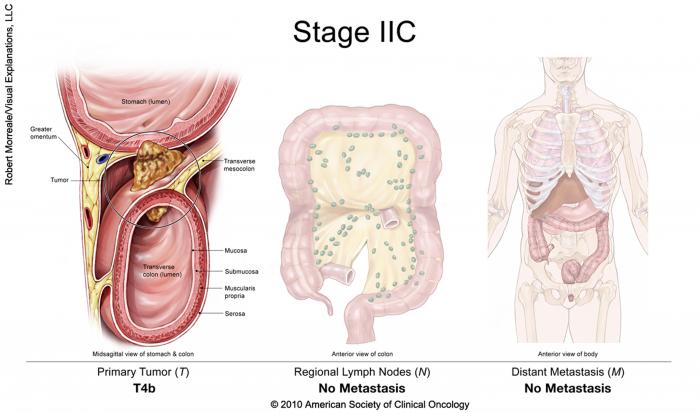 Stage IIIA: The cancer has grown through the inner lining or into the muscle layers of the intestine. It has spread to 1 to 3 lymph nodes or to a nodule of tumor cells in tissues around the colon or rectum that do not appear to be lymph nodes but has not spread to other parts of the body (T1 or T2, N1 or N1c, M0; or T1, N2a, M0). 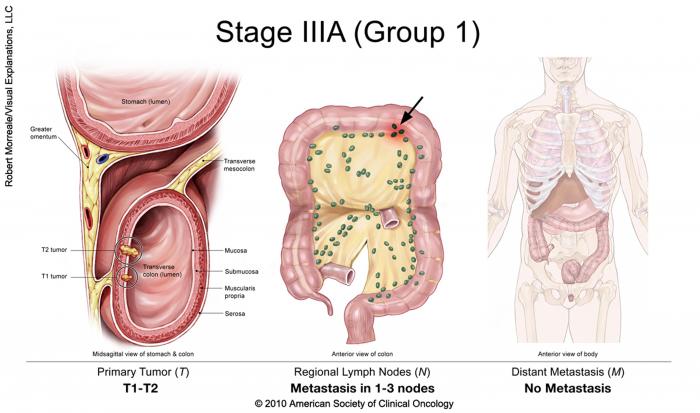 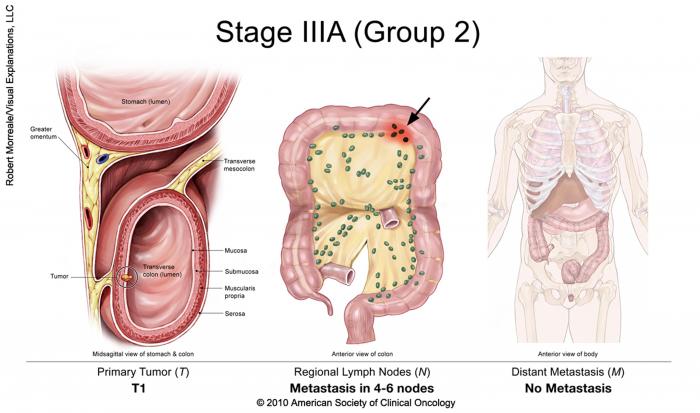 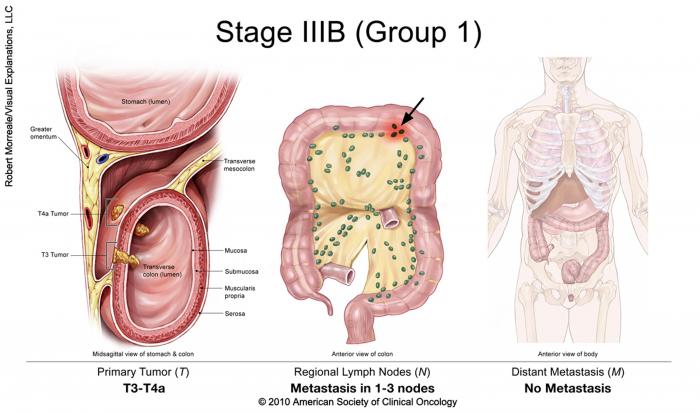 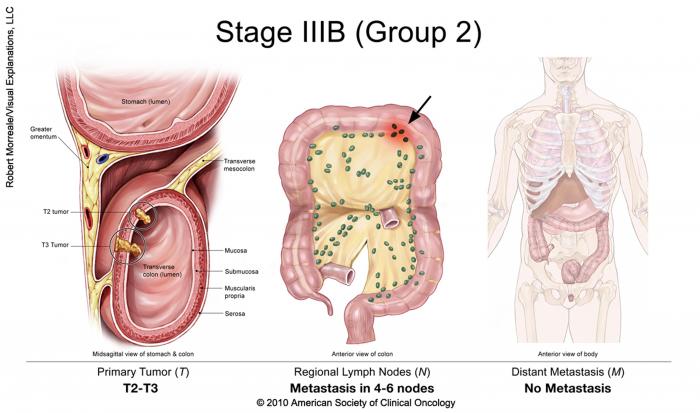 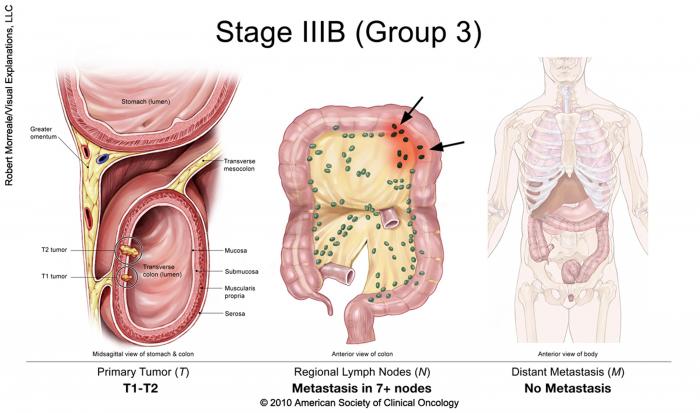 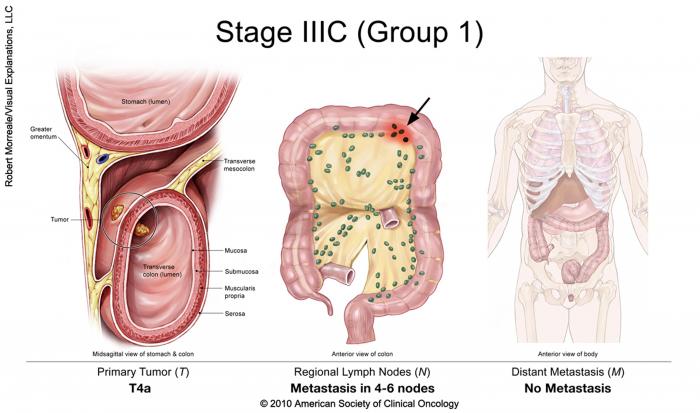 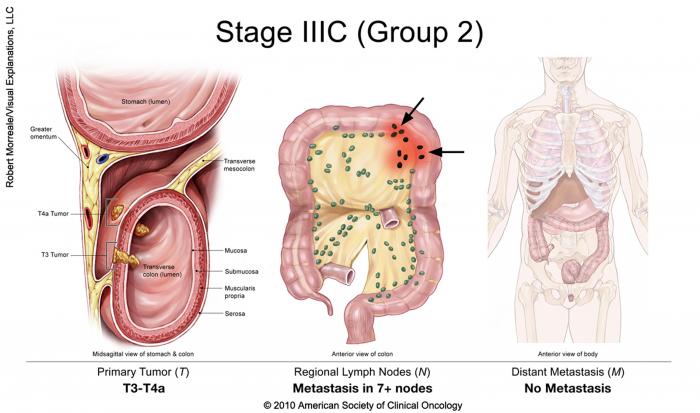 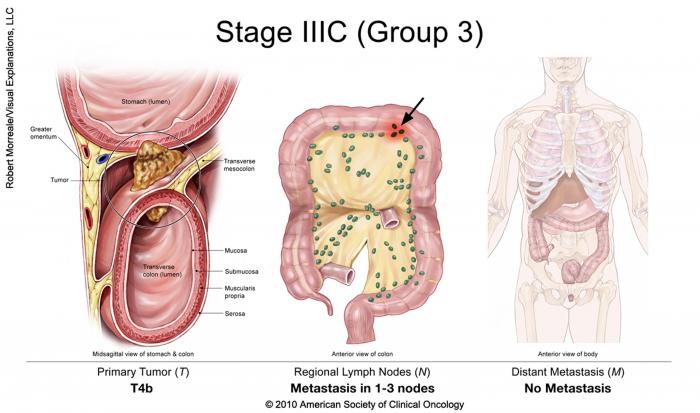 Stage IVA: The cancer has spread to a single distant part of the body, such as the liver or lungs (any T, any N, M1a). 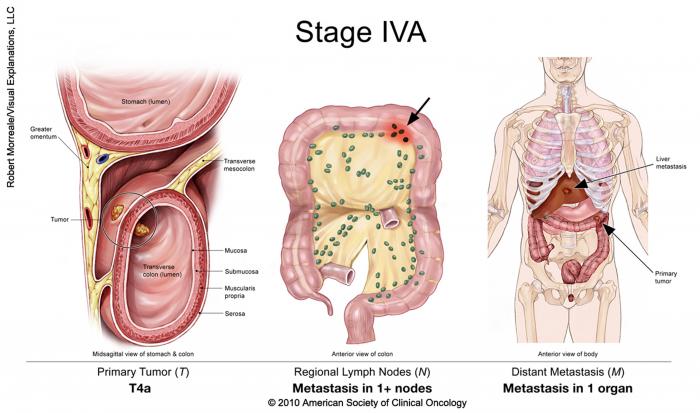 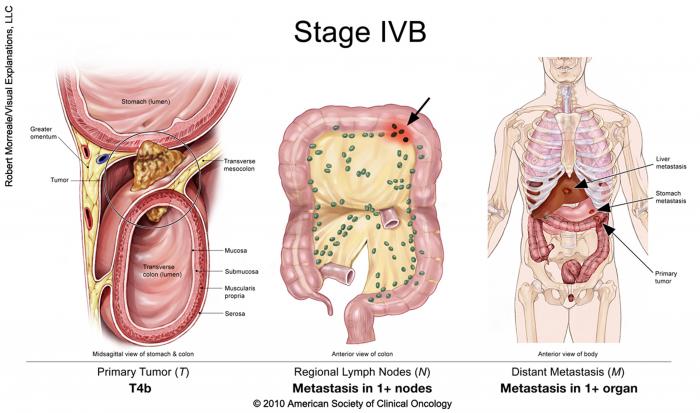 Stage IVC: The cancer has spread to the peritoneum. It may also have spread to other sites or organs (any T, any N, M1c). 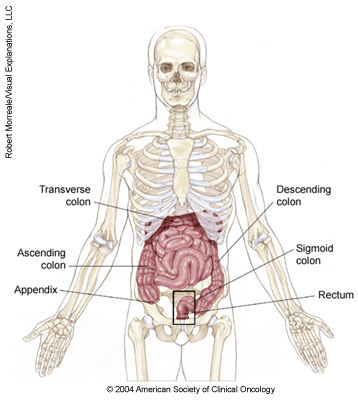 Recurrent: Recurrent cancer is cancer that has come back after treatment. The disease may be found in the colon, rectum, or in another part of the body. If the cancer does return, there will be another round of tests to learn about the extent of the recurrence. These tests and scans are often similar to those done at the time of the original diagnosis.

Used with permission of the American College of Surgeons, Chicago, Illinois. The original and primary source for this information is the AJCC Cancer Staging Manual, Eighth Edition (2017), published by Springer International Publishing.

Information about the cancer’s stage will help the doctor recommend a specific treatment plan. The next section in this guide is Types of Treatment. Use the menu to choose a different section to read in this guide.