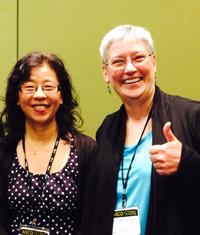 Janet Freeman-Daily is a writer, speaker, and science geek who has had metastatic lung cancer since 2011. She is an avid blogger and is a founder and moderator for the Lung Cancer Social Media (#LCSM) Chat on Twitter.

My first ASCO Annual Meeting was an educational and exhilarating experience. As a science geek, I loved learning about new cancer treatments from leading researchers. But the highlight for me happened in a noisy back corner of a crowded poster session when I met Dr. J. Jean Cui, the chemist who is saving my life.

A little backstory: I was diagnosed in May 2011 with stage IIIa non-small cell lung cancer (NSCLC). After two series of chemo, two radiation protocols, two recurrences, and promotion to stage IV, I was told I’d be on chemo for the rest of my life. Thanks to “CraiginPA,” who I met in an online support group, I learned about a tumor mutation called ROS1 and arranged to have my tumor tested. I’m now enrolled in the same ROS1 clinical trial as CraiginPA, taking a pill called crizotinib (Xalkori) to suppress my lung cancer. I’ve had no evidence of disease (NED) status since January 2013. I know my cancer will likely return, but for now, life is almost normal.

CraiginPA and I both attended the 2014 ASCO Annual Meeting as patient advocates. We met “in real life” in Chicago the day before the meeting began and attended many sessions together. On the third day, June 1, we went to a lung cancer poster highlights session. Similar to a high-powered science fair, the session featured 25 large posters explaining ongoing studies, each with a researcher standing by to answer questions. One poster described a study of our drug crizotinib for ROS1 in Europe.

While we were tag-teaming the researcher with questions, we noticed two representatives of the pharmaceutical company who makes crizotinib standing nearby. We introduced ourselves and moved to a table to discuss when our trial drug might obtain FDA approval for ROS1.

After several minutes, one of the reps smiled and said, “Jean is here.”

CraiginPA’s face lit up. “She’s the chemist—the lead inventor who developed our drug!”

My geek meter pegged at ecstatic. The chemist who invented the drug that was keeping me alive was HERE!

“If I see Jean, I’ll tell her you’re looking for her,” one of the reps said. They excused themselves to talk to another researcher.

A bit giddy, CraiginPA and I went back to digesting the ROS1 poster. We had started debating where the drug actually bonded with the ROS1 protein on our tumor cells when a smiling young woman approached us.

CraiginPA recognized her instantly. “Jean! So good to see you again.”

I felt like I did when I’d been introduced to idols like Nobel Laureate Physicist Richard Feynman or MD/PhD/Astronaut Story Musgrave. This was not some academic stuck at a bench with glassware and data analysis. This cancer rock star was a real person, and she seemed just as happy to meet us as we were to meet her. How often does a researcher get to see the living, breathing proof that her work saves lives?

We hugged all around and coerced someone into taking a picture with Jean’s smartphone. I couldn’t have grinned any wider.

For the next 20 minutes, Jean fielded our questions about her background, why she chose chemistry as a career, and how her team designed the drug. CraiginPA and I were like two kids getting a peek behind the Wizard’s curtain at the magic of cancer research. We agreed this experience was easily our highlight of the meeting, especially for me since I experienced it with CraiginPA who first told me about this drug.

Later Jean emailed us the picture, along with an invitation to ask her any further questions we might have—a perfect end to an amazing day.

So stop me if you’ve heard this one: a patient advocate, a pharma rep, and a chemist walk into a poster session...