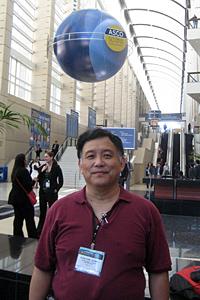 Alvin Chin serves as a member of the planning committee for the Fairfax INOVA Us TOO Prostate Cancer Support Group and was recently elected the Chairman of the Board of Directors for the Virginia Prostate Cancer Coalition. He received a Conquer Cancer Foundation Patient Advocate Scholarship to attend the 2014 ASCO Annual Meeting, May 30 – June 3, 2014, in Chicago, Illinois. This program allows patient advocates to further educate themselves on important advances in their areas of interest and share what they learned to make a difference in the lives of people affected by cancer.

When was the last time you felt like a child in a candy store? For most of us, as adults, we have outgrown the urge to stuff ourselves with candy so those moments are few and far between. But, attendance at the Annual Meeting of the American Society of Clinical Oncology (ASCO) is like visiting a candy store for those with a sweet tooth for relevant and important scientific and medical cancer treatment information.

The ASCO Annual Meeting offers so many opportunities to learn new things and hear about breakthroughs in cancer therapeutics that give people hope and inspiration for an improved life with cancer.

This is the second time I have attended the ASCO Annual Meeting in five years, and I fully expected to hear about new treatments and new protocols for optimizing treatment based on clinical research carried out by clinicians—and I was not disappointed. There were not only informative sessions throughout most days on the cancer of my interest (prostate) but also other topics appropriate to the 50th anniversary of the founding of ASCO. Specifically, I was very pleased to see sessions on the cost, value, and sustainability of oncology care and other sessions that are relevant to society today. As was often indicated by speakers, these sessions, 15-20 years ago, would not have been as highly attended as they were at this moment when these issues have become overwhelmingly important and, in fact, may determine who lives and dies from cancer.

The theme of “social justice” was common and clearly important during the meeting. Some sessions took us beyond the mere excitement of updating the “cookbook” of cancer care and into the realm of managing critical care for the aging masses when the significant costs of therapeutics and technology are causing universal concern. At the same time, our research budget is decreasing further to below 0.1% of national resources. ASCO is making the clarion call for action and appears to be leading the way in addressing these issues.

The keynote speech by Dr. Clifford Hudis on Saturday, very much established the tone of the meeting for me. I had not realized the social setting that ASCO was established in. I felt it was very appropriate that ASCO, on its 50th anniversary, reaffirmed its origins under the theme of social justice and reminded its members and other attendees of the inspiration that gave this society impetus for growth and professional learning. Indeed, it was a very inspirational plenary session that left me as a patient advocate with the impression that this organization is in good hands for the future as it strives for the best in cancer care for all those afflicted with the disease in its many forms.