How I Went From Caregiver to Patient Advocate 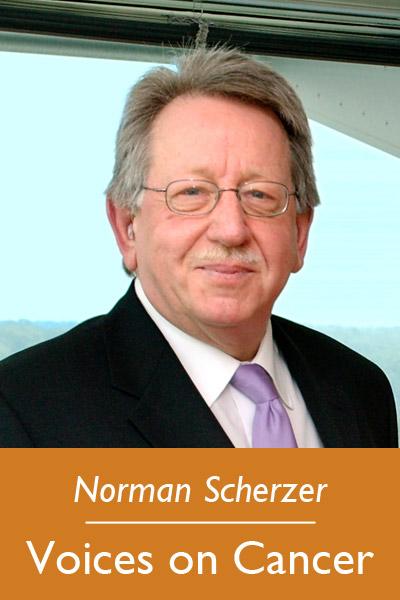 Voices on Cancer is a Cancer.Net Blog series where advocates share their stories and the lessons they have learned about being a cancer advocate.  Norman Scherzer is the Executive Director of The Life Raft Group, a nonprofit organization that advocates for people with gastrointestinal stromal tumor (GIST) and their caregivers. GIST is uncommon, with about 4,000 to 5,000 patients newly diagnosed in the United States each year.

In 2000, my wife Anita and I had reached what I feared was the end. She had been diagnosed with a rare form of cancer known as leiomyosarcoma in 1994, and after countless surgeries, rounds of radiation, and rounds of chemotherapy, her doctors told us there was nothing else that could be done. We gathered together our 2 children and 6 grandchildren to celebrate our 39th wedding anniversary, but also to say goodbye, as we didn’t know if there would be a 40th. Still, I felt that there must be something else I could do. I took to the internet and dove into research.  I found out Anita probably didn’t have leiomyosarcoma after all, but instead something called gastrointestinal stromal tumor (GIST). This was hardly good news though, as even though her treatments for leiomyosarcoma hadn’t proved successful, at least they existed. GIST had no approved treatments at all. However, after further research, I found out about a clinical trial for a drug called STI-571 that seemed to show some good results. I went into overdrive, contacted anybody I could related to the clinical trial, and somehow managed to get Anita in. She was number 27 of 30 patients enrolled.  All I could do now was wait and hope.

Fast forward to almost a month later. I was sitting in the radiology waiting room at the cancer center while Anita was having scans taken for the clinical trial. The radiologist rushed into the waiting room and appeared almost out of breath. Seeing me, he said, “I need to show you something.”  I had no idea what to expect. He took me to the back, where my wife’s scans were. I will never forget what he told me next. “Half of your wife’s tumors are gone, and the other half are turning into liquid.” He also told me that he had never seen anything like this before.

It has been over 16 years since these events took place.  STI-571 was eventually approved by the U.S. Food and Drug Administration (FDA) and became imatinib (Gleevec), which has saved the lives of countless people.

In 2000, the Life Raft Group was created to help people diagnosed with GIST and their caregivers, and it has continued on to this day. We truly started as a “kitchen table” organization, with an internet presence and a desire to keep patients like Anita alive. We are now an organization that operates in over 50 countries worldwide, works alongside other great organizations, and was recently asked to participate in Vice President Joe Biden’s Cancer Moonshot Summit. I can honestly say I never imagined back in 2000 that my path would have evolved this way.

A word of advice

If you choose to be an advocate, it will seem frustrating at times, but ultimately it is a truly noble calling because it enables you to help and serve others. I hope that my personal story illustrates why this is a path so worth pursuing.

Just like the doctors and researchers involved in cancer, the role of the advocate is vital.  You are the voice of the patient and their family.  You are who they turn to when they need information and support and have nobody else. For some of us, we become involved through our own illness or that of a loved one. For others, they are called because that’s just who they are.  Either way, there will be moments of frustration when you’ll feel as if you are not doing enough, your work is not appreciated, or the obstacles are just too great. You’ll want to quit.

When this happens, focus on why you started.

Remember that you are truly making a difference in the lives of people who need you, often more than you could ever imagine.

Update: Just before this article was posted, Anita passed away, at home and with Norman by her side. Anita had been stable on imatinib for 16 years, and she and Norman celebrated their 55th anniversary this year and welcomed a 7th grandchild. Norman continues to work tirelessly on behalf of GIST patients worldwide, honoring her memory by doing whatever he can to keep patients like her alive as long as possible.