From Inspired to Involved: Why I Became a Breast Cancer Advocate 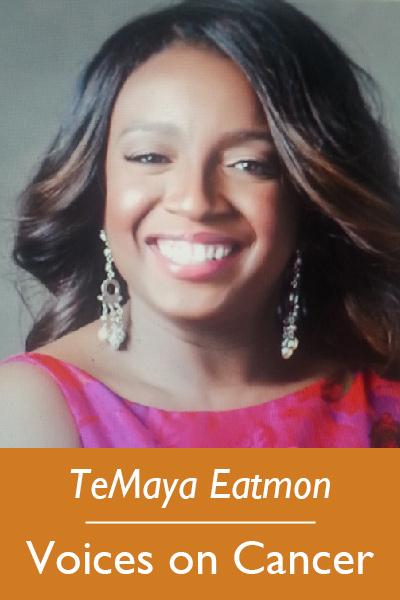 Voices on Cancer is an award-winning Cancer.Net Blog series where advocates share their stories and the lessons they have learned about being a cancer advocate. TeMaya Eatmon was diagnosed with breast cancer in 2012. The challenges she experienced during treatment and the people she met along the way inspired an advocacy journey focused on eliminating health care disparities among minorities and young women facing the disease. She was recently named a Ford Warriors in Pink Model of Courage.

I was only 36 when I was diagnosed with breast cancer. Luckily, I had a phenomenal nurse navigator who introduced me to organizations focused on young women with the disease. One of those organizations had a support group in Atlanta, GA, where I live. At a meeting in August 2013, I met Tanya Mayfield.

Tanya was the only other African-American woman there, and we were drawn to each other. She shared with me that she was initially diagnosed with the highly treatable ductal carcinoma in situ (DCIS) breast cancer. But after her initial surgery, the pathology report revealed that her cancer was “triple negative.” In other words, her cancer was more challenging than expected, so her course of treatment changed. We exchanged information so we could check in with each other before our next support group meeting.

A friendship that would inspire me more than I ever could have imagined was born!

Tanya and I created “Chocolate Pink Fridays.” Every first Friday for almost a year we met for dinners, dessert, shopping, and more. It was our way to connect and talk about everything but our breast cancer. It was our way to get some normalcy back in our lives while accepting our “new normal.”

Chocolate Pink Fridays had to stop when Tanya had a recurrence. Her chemotherapy weakened her and made her tired. We still called each other on Chocolate Pink Fridays and made a list of what those days would look like once she regained her strength. In June 2016, she knew I was reaching a milestone birthday and how much that meant to me. She used all the strength she could find to celebrate with me. She did this while knowing that, even though the cancer that had moved up toward her throat was in remission, another tumor had been detected. She didn’t tell me until 3 weeks later.

It was official. Tanya now had metastatic breast cancer. She joined a clinical trial on triple-negative breast cancer at the MD Anderson Cancer Center in Houston. She asked if I would accompany her on one of the visits. Without hesitation, I agreed. I was scheduled to go in February 2017, but that visit never occurred. Her tumor stopped shrinking, so she was no longer able to stay on the trial. She decided to continue working with her medical team in Houston, despite it being a grueling trip.

During Tanya’s May trip to Houston, her strength diminished to the point where she couldn’t travel home to Atlanta after her appointment. She was fortunate to be able to stay at the Ballard House, which provides free temporary housing for patients receiving treatment for a life-threatening illness. On August 3,2017, I traveled there to serve as her caregiver, relieving her mother and sister for a few days.

I met her at her doctor’s appointment and quickly realized the severity of the situation. Tanya had lost over 15 pounds since her last visit and some of her pain had worsened. She focused on the positive; she always did. I, on the other hand, was so saddened by how my friend was deteriorating before me. How she seemed to be in so much pain. How breast cancer really can kill. Yet I knew I had to maximize my moments with her because they could very well be the last ones we had together.

We laughed and talked until she fell asleep after taking her pain medicine. We talked about choices we made and how hindsight was 20/20. I told her that she was so amazing to fight like she did, with such class, dignity, and tenacity. I told her when she was tired it was OK. She had fought the good fight, and heaven would get an awesome angel.

The day I left Houston, Tanya told me that I’d found my purpose. She said I’d be her voice, telling her story and championing the need to increase metastatic breast cancer research, triple-negative research, and minorities in clinical trials and to eliminate health care disparities for young women.

On September 14, 2017, Tanya gained her wings. My earthly self was extremely emotional, but my spirit found a peace I hadn’t felt before. I knew that during our last time together she’d breathed life into me, and it wasn’t by accident. You see, Tanya became more than my friend. She became a sister, therapist, cheerleader, motivator, prayer partner—and a true inspiration for my advocacy work today.

Discover your source of inspiration

The inspiration to become an advocate in the cancer community can come from within, from others, and from places you’d never expect.