ASCO Annual Meeting 2018: A Preview of This Year’s Research 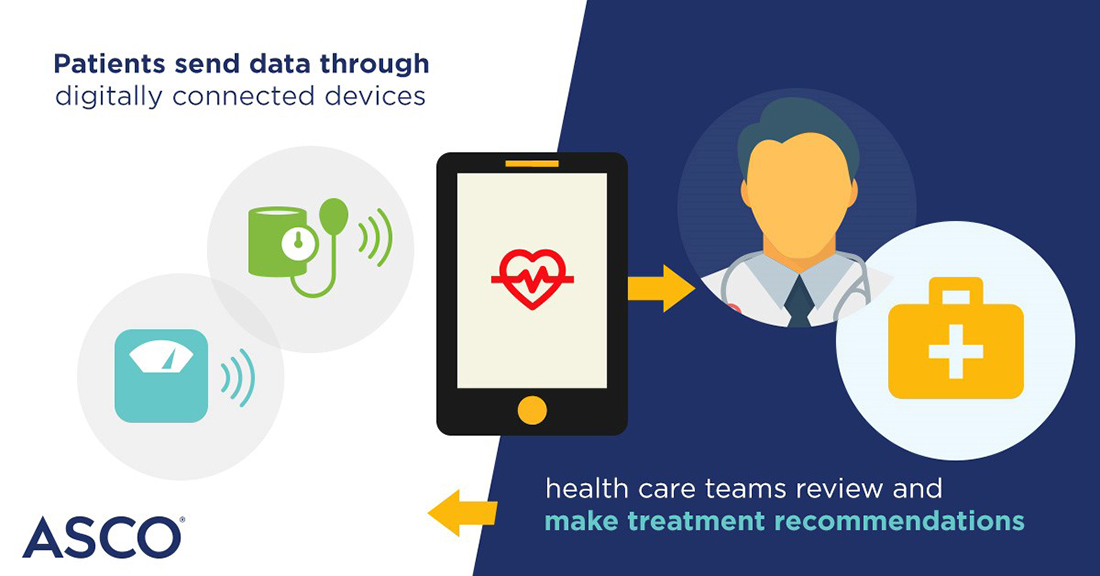 The people participating in this study received radiation therapy for head and neck cancer for 6 to 7 weeks. Common side effects from this treatment include pain and difficulty swallowing that can lead to dehydration.

In this study, funded by the National Institutes of Health, about half of the participants were randomly assigned to use a technology called CYCORE and the other half received the usual care. CYCORE is a technology system that incorporates commercially available Bluetooth-enabled devices. For the study, participants in the CYCORE group received a Bluetooth-enabled weight scale, blood pressure cuff, and mobile tablet with a symptom-tracking app. The symptom-tracking app sent information directly to the person’s health care team daily, who could then review the information and make treatment recommendations.

What does this mean? Through the use of mobile technology, patients were able to report symptoms quickly, allowing their health care team to create a timely plan to manage those symptoms and prevent treatment related complications.

“Our study generated evidence on how newer technologies can be integrated into cancer care relatively easily and improve patient outcomes without interfering too much in a person’s daily life. This study was done during a rather intense period in the patients’ care for head and neck cancer. The system helped their physicians to provide valuable support that ultimately resulted in lower symptom severity.”

A phase III clinical trial showed that treating early-stage, HER2-positive breast cancer with trastuzumab (Herceptin) for 6 months works just as well as having the treatment for 12 months and causes fewer heart problems. Trastuzumab is a type of targeted therapy used as a standard treatment for early-stage, HER2-positive breast cancer. The current standard of care involves taking trastuzumab for 12 months after the cancer is diagnosed.

HER2 is a specialized protein on the surface of breast cells and a driver of tumor growth. High levels of HER2 are found in 20% to 25% of breast cancers. This type of breast cancer is called HER2-positive. A targeted therapy, such as trastuzumab, is a drug that works by targeting the HER2 protein linked to cancer.

In this recent study called Persephone, 4,088 women with early-stage, HER2-positive breast cancer were given trastuzumab for either 6 months or 12 months. All the women in the study also received chemotherapy. In both groups, after 4 years, 89% of the women had been free of breast cancer (89.4% in the 6-month group and 89.8% in the 12-month group).

What does this mean? This study shows that a shorter course of treatment has the potential to reduce treatment side effects by limiting exposure to the drug.

“The Persephone trial’s researchers worked closely with patient advocates. Everyone involved in this study is very excited by these results. We are confident that this will mark the first steps towards a reduction of the duration of trastuzumab treatment to 6 months in many women with HER2-positive breast cancer.”

Standard treatment is chemotherapy with a combination of drugs known as COG augmented Berlin-Frankfurt-Munster, or aBFM.

In addition, children and young adults with a moderate to high risk of T-ALL coming back after treatment who received nelarabine (Arranon) plus the standard treatment had a higher chance of survival. Nelarabine is a type of targeted therapy that has previously been used to treat T-ALL and T-LL that does not respond to at least 2 types of chemotherapy or has come back after treatment.

All 1,895 participants in the clinical trial received the standard chemotherapy regimen for T-ALL and T-LL. The participants were also randomly assigned to receive either high-dose methotrexate in a hospital or increasing doses of methotrexate at a treatment center.

In addition, participants who had a moderate to high risk of the leukemia or lymphoma coming back received one of the following:

What does this mean? Children and young adults with newly diagnosed T-ALL may benefit from the addition of nelarabine. Those treated with standard chemotherapy treatment who received increasing doses of methotrexate lived longer than those receiving high-dose methotrexate.

“T-cell ALL is a disease that requires the use of a very intense and complex chemotherapy regimen. Historically, about 80% of people live at least 4 years after being treated for their disease, but we felt we could and must do better. Our trial shows that we could further increase survival rates by about 10%, which is very encouraging.”

Most people who smoke heavily are not screened for lung cancer

Only 1.9% of current and former heavy cigarette smokers are receiving screening for lung cancer, according to results of a new survey of 1,800 lung cancer screening centers throughout the United States.

Lung cancer is the leading cause of death from cancer in the United States. According to screening recommendations from the U.S. Preventive Services Task Force (USPSTF), people who are considered heavy smokers should receive screening for lung cancer with low-dose computed tomography (LDCT), as previous research has shown that it reduces the risk of dying from lung cancer by 15% to 20%. The federal government defines a heavy smoker as someone age 55 to 80 who has smoked for 30 pack years or more, even if they have quit within the past 15 years. A pack year is equal to smoking 20 cigarettes (1 pack) a day each year.

This study gathered information on how many people received LDCT screening from the 2016 American College of Radiology’s Lung Cancer Screening Registry. This data was compared with estimates of the total number of people who are considered heavy smokers that should receive LDCT screening from the 2015 National Health Interview Survey. The researchers found that out of the 7,612,975 people considered heavy smokers nationwide, only 141,260 people received LDCT screening.

What does this mean? This study shows that the rates of recommended lung cancer screening are very low and is a step toward learning how to change that in the future.

“Lung cancer screening rates are much lower than screening rates for breast and colorectal cancers, which is unfortunate. It is unclear if the screening deficit is due to low provider referral or perhaps patient psychological barriers from fear of diagnosis. Lung cancer is unique in that there may be stigma associated with screening, as some smokers think that if cancer is detected, it would confirm they’ve made a bad lifestyle choice.”

A comparison of different approaches to genomic testing of metastatic non-small-cell lung cancer (NSCLC) showed that using next generation sequencing (NGS) at the time of diagnosis was faster and less expensive than testing 1 gene or a few genes at a time after treatment has started. NGS is a newer technology that tests for changes, or mutations, in several genes at a time.

In recent years, genomic testing has become an important step in treatment planning for advanced NSCLC. Genomic tests look at the genes in a tumor to help predict how quickly the cancer may grow and spread. There are several genes that, if altered, are linked to NSCLC, including EGFR, ALK, ROS1, BRAF, MET, HER2, RET, and NTRK1. The protein PD-L1 is also linked to NSCLC. Genomic testing is important for planning treatment. For example, there are targeted therapies available for tumors with altered EGFR, ALK, ROS1, or BRAF genes, and immunotherapy is an option for NSCLC that makes the PD-L1 protein.

There are many different genomic tests available today, but there is no standard for how and when testing is done. This study created a hypothetical model that compared 4 types of genomic tests for genes linked to NSCLC, with everyone receiving PD-L1 testing:

According to the researchers, NGS is faster because results are available within 2 weeks, whereas the single-gene and KRAS test results usually take more than 4 weeks. Another benefit of NGS is that tissue from the initial biopsy can be used for the test. Single-gene tests could require more tissue, which would require an additional biopsy.

The researchers also calculated the costs of each of these tests using information from health plans offered by Medicare and private insurance companies. The calculations showed that, in this model, NGS saved up to $2.1 million for Medicare and up to about $250,000 for other insurance companies compared with the other genomic test approaches.

What does this mean? While more research is needed, the model shows that broad genomic testing of the tumor at the start of advanced NSCLC treatment planning could lead to savings in both time and cost.

“The field of lung cancer treatment is moving at a rapid pace, and we need to fully characterize genomic changes to determine the best treatment for patients shortly after they are diagnosed. Today, many treatment decisions are guided by the presence or absence of certain genetic changes in a patient’s tumor, and I expect that several more genes will be identified in the near future. Therefore, it becomes even more imperative to find a cost-effective gene test that can quickly identify a large number of gene mutations that can be targeted with treatments.”

Psychotherapy and acupuncture are effective for treating insomnia in cancer survivors

A new study shows that cognitive behavioral therapy and acupuncture are helpful for treating insomnia in cancer survivors.

Sleep problems can cause tiredness, low energy, poor concentration, and irritability, as well as make other cancer-related side effects, like pain or anxiety, worse. Mild insomnia involves trouble falling asleep or waking up a few times during the night. Moderate to severe insomnia involves tossing and turning, little sleep, and poor functioning the next day.

In this study, 160 cancer survivors with insomnia received either cognitive behavioral therapy or acupuncture for 8 weeks. The type of cognitive behavioral therapy used in this study is a newer type that specifically addresses insomnia. It is focused on changing emotions, behaviors, and thoughts related to sleep to improve the quality and depth of sleep. The acupuncture sessions involved the use of very tiny needles on specific points on the body that have been shown to affect sleep.

The study’s participants included people who had been successfully treated for cancer, including breast cancer, prostate cancer, head and neck cancer, and blood cancers. A few participants had received treatment for more than 1 type of cancer. The average time since their cancer diagnosis was about 6 years. None of the participants were still receiving cancer treatment.

Both treatments resulted in better physical and mental health, but cognitive behavioral therapy was significantly more effective for treating mild insomnia than acupuncture.

What does this mean? Cognitive behavioral therapy and acupuncture may be good choices for treating insomnia based on the severity. Talk with your doctor about the best treatment option for you.

“Up to 60% of cancer survivors have some form of insomnia but it is often underdiagnosed and undertreated. Our trial showed that both cognitive behavioral therapy [CBT-I] and acupuncture were effective in treating moderate to severe insomnia, although CBT-I was more effective for those with mild symptoms of insomnia. Now patients have more choices to manage their insomnia.”