More than 32,000 oncology professionals from around the world are at the ASCO Annual Meeting, presenting and discussing the latest research in cancer treatment and patient care. Learn about highlighted research released today:

Lynch syndrome is common in people with MSI-high tumors

An analysis of more than 15,000 tumor samples has found that people with tumors that have high microsatellite instability (MSI-H) are more likely to have Lynch syndrome. Lynch syndrome is an inherited cancer syndrome that increases a person’s risk of developing several types of cancer. A main reason why it is important to know if a person diagnosed with cancer has Lynch syndrome is because his or her family members may also have the syndrome. Colorectal cancer and uterine cancer are the most common types associated with Lynch syndrome, but people may also develop cancer of the stomach, breast, ovary, small bowel, pancreas, prostate, bladder, liver, kidney, or bile duct. Lynch syndrome-related tumors are often MSI-H and have mismatch repair deficiency (MMR-D), which means a reduced ability to repair damaged DNA in cells.

MSI is a genomic marker that indicates a flaw in a cell’s ability to repair damaged DNA, which can lead to more and more genetic changes, or mutations. Because colorectal and uterine cancers are the types most commonly found in people with Lynch syndrome, those tumors are often tested for MSI-H. But in 2017, the U.S. Food and Drug Administration (FDA) approved an immunotherapy called pembrolizumab (Keytruda) for the treatment of all MSI-H tumors. Since then, MSI testing of all tumors has become more common to see if people can be treated with pembrolizumab.

The researchers in this study analyzed 15,000 tumor samples from people with more than 50 different types of advanced cancer. Next-generation sequencing was used to look for many cancer-related genes and molecular changes, including MSI, at the same time. Blood samples were also tested for specific genetic mutations that cause Lynch syndrome.

Analysis of the genomic sequencing found that 93.2% of the tumors had no MSI. Another 4.6% of the samples had a moderate amount of MSI (MSI-I), and 2.2% were MSI-H. Inherited genetic mutations that cause Lynch syndrome were found in less than 1% of the people with tumors with no MSI. Those genetic mutations were found in 1.9% of people with MSI-I tumors and in 16% of those with MSI-H tumors.

There was a total of 1,025 tumors with either MSI-I or MSI-H. Of those, 1 of every 4 was either colorectal cancer or uterine cancer. However, the analysis also found that nearly half of the people with an MSI-H or MSI-I tumor and Lynch syndrome had a type of cancer not previously linked with the syndrome. These cancer types included mesothelioma, sarcoma, adrenal gland tumor, melanoma, prostate cancer, and ovarian germ cell cancer. Of those people, 45% would not have been tested for Lynch syndrome because they did not meet the testing criteria based on their personal or family history of cancer.

In the last step of the study, 57 MSI-I/MSI-H tumor samples were tested for MMR-D. Almost all (98.3%) of the tumors in this group had MMR-D. 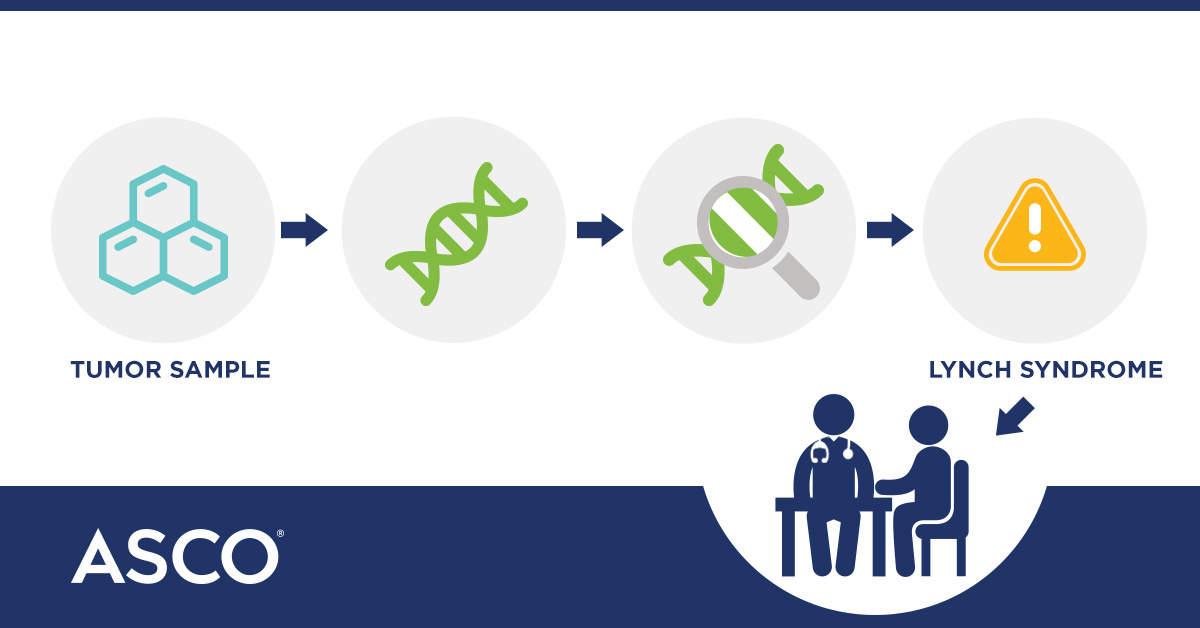 What does this mean? This study suggests that expanded testing may find more people and families with Lynch syndrome and this syndrome is linked to more types of cancer than previously thought.

“Our findings suggest that all patients with MSI-H tumors should be tested for Lynch syndrome, regardless of cancer type or family or personal history of cancer. Diagnosing Lynch syndrome gives us the unique opportunity of helping not only our cancer patients, but also at-risk family members, as their cancer risk can be lowered through increased cancer surveillance and, in some cases, preventive surgery.”

An early report from the ongoing, large Circulating Cell-Free Genome Atlas (CCGA) study examined using a blood test to detect early-stage lung cancer. This blood test, sometimes called a “liquid biopsy,” analyzed free-floating or “cell-free” DNA in the blood. This type of testing is already used for people with advanced lung cancer, so the researchers wanted to see if it could also reliably find early-stage cancer.

The CCGA study currently has more than 12,000 participants from the United States and Canada, and 70% of those participants have different types of cancer. This report studied the effectiveness of 3 different ways of gene sequencing to find cancer in 127 people with stage I to stage IV lung cancer. Those sequencing methods included deep sequencing of a few hundred genes to look for mutations, whole-genome sequencing (WGS) to look for areas of the genome that are duplicated, and whole-genome bisulfite sequencing (WGBS) to look for a chemical change in the DNA called methylation. All 3 ways are done using a sample of a person’s blood.

What does this mean? While more research is needed to confirm these findings, health care providers may be able to screen people for lung cancer using a simple blood test in the future.

“We’re excited that initial results from the CCGA study show it is possible to detect early-stage lung cancer from blood samples using genome sequencing. There is an unmet need globally for early detection tests for lung cancer that can be easily implemented by health care systems.”

Combining a new targeted therapy called taselisib with standard hormone therapy was shown in a phase III clinical trial to stop the growth of advanced breast cancer for 2 more months than hormone therapy alone. It also lowered the chance of the cancer worsening by 30%.

Targeted therapy is a treatment that targets the cancer’s specific genes, proteins, or the tissue environment that contributes to cancer growth and survival. It blocks the growth and spread of cancer cells while limiting damage to healthy cells.

Taselisib is a kind of targeted therapy called a PI3K inhibitor, which targets the PIK3CA genetic mutation that is common in breast cancer.

This clinical trial, called SANDPIPER, included 516 postmenopausal women with locally advanced or metastatic estrogen receptor (ER)-positive, human epidermal growth factor receptor 2 (HER2)-negative breast cancer that had worsened or recurred after hormone therapy with aromatase inhibitors. Women were randomly assigned to 1 of 2 groups, either receiving fulvestrant (Faslodex) plus placebo (176 women) or receiving fulvestrant plus taselisib (340 women). Fulvestrant is a standard hormone therapy used to treat metastatic ER-positive breast cancer in women who have already gone through menopause. A placebo is an inactive drug.

Women who received fulvestrant plus taselisib had a 30% lower chance of cancer worsening than those who received fulvestrant and a placebo. Taselisib also stopped the cancer from worsening by a median of 2 more months (7.4 months) than treatment with fulvestrant and placebo (5.4 months). The median is the midpoint, meaning half of the women were on each side of the median. Adding taselisib to the hormone therapy more than doubled the percentage of tumors that shrank in response to the treatment (28%) compared with hormone therapy alone (11.9%).

What does this mean? For certain women with advanced or metastatic breast cancer, adding taselisib to hormone therapy might help them live longer.

“About 40% of all patients with advanced, estrogen receptor-positive breast cancer have PIK3CA mutations, which means they could benefit from taselisib. Our findings are proof that targeting this pathway in breast cancer is effective. However, the benefit to patients was more modest than we had hoped for, and there is a risk of considerable side effects with the addition of taselisib.”

The first findings from a phase III clinical trial show that combining an immunotherapy called atezolizumab (Tecentriq) with chemotherapy slowed the growth of advanced squamous non-small cell lung cancer (NSCLC). Squamous NSCLC is difficult to treat effectively and accounts for up to one-third of diagnoses of NSCLC. This combined immunotherapy-chemotherapy treatment reduced the risk of the disease worsening in 29% of the study participants. Atezolizumab is a type of immunotherapy called a PD-L1 inhibitor, which works on tumors that express the PD-L1 protein.

The IMpower131 study includes 1,021 people with stage IV squamous NSCLC. Tumors with ALK or EGFR genetic changes, or mutations, were first treated with targeted therapy. Then, all people in the study were randomly assigned to 1 of 3 treatment groups. The first group included 343 people who were treated with atezolizumab plus chemotherapy. The second group included 340 people who were treated with chemotherapy alone. The chemotherapy regimen included a generic drug called carboplatin and nab-paclitaxel (Abraxane). The third group was treated with atezolizumab plus carboplatin and another generic drug called paclitaxel. The results from the third treatment group are not yet available.

After 12 months, cancer had been slowed in nearly 25% of the people in the immunotherapy-chemotherapy treatment group. In those treated in the second group with chemotherapy alone, 12% had their cancer stop growing. Across all the people in the study’s results, 29% had a lower risk of the cancer getting worse, regardless of whether the tumor expressed PD-L1. The combined treatment did have a higher rate of severe side effects than chemotherapy alone (68% vs. 57%). The most common side effects of atezolizumab were skin rash, colon inflammation, and low thyroid hormone levels. More research is needed to know who will benefit most from this combined treatment.

What does this mean? Adding a PD-L1 inhibitor to chemotherapy may help slow the growth of advanced squamous NSCLC in certain people.

“Until now, there have been few treatment advances for squamous non-small-cell lung cancer. Our findings may provide a new potential treatment option for this type of cancer. We used to think that chemotherapy just knocked down the patient’s immune system and that it would be irrational to combine it with immunotherapy, but growing research, including this study, shows that chemotherapy can help trigger the immune response to the tumor, helping the immunotherapy treatment work better.”

The IMPACT clinical trial started in 2007 and included people with advanced cancers that are difficult to treat, including different types of gastrointestinal cancers, gynecologic cancers, breast cancer, melanoma, lung cancer, and thyroid cancer. Tumors were tested for genetic mutations in 3,743 people, and at least 1 mutation was found in 1,307 tumors. Of those, 711 people were found to have a tumor genetic mutation for which a targeted therapy existed, and that group was given the treatment matched to the tumor’s mutation. Another 596 people were given a treatment that did not match the mutation because no matched treatment was available at that time. Improvements in tumor testing, called next-generation sequencing, have given doctors the ability to search for 20 to 50 different genes at the same time. This can help find more matched treatments for more tumors.

This study also identified several factors that may influence how well a targeted therapy may work:

What does this mean? If a tumor has a mutation that can be treated with a targeted therapy, then that matched treatment should be considered because it may help people with advanced cancer live longer.

“This is the first and largest study—with the longest follow-up—to assess the impact of precision medicine approaches on survival across multiple cancer types. Our findings show that molecular testing of tumors using next-generation sequencing can be used to optimize therapy and should be taken into consideration when selecting therapy for patients with difficult-to-treat cancers.”