Results from a large clinical trial called TAILORx showed that more women with early-stage breast cancer may now be able to avoid chemotherapy after surgery. The women who participated in the study had hormone receptor-positive, HER2-negative, axillary node-negative breast cancer, which is the most common type of breast cancer.

This type of breast cancer is typically treated with hormone therapy. Women who have a high risk of a breast cancer recurrence also receive chemotherapy, called adjuvant chemotherapy. A recurrence is when cancer comes back after treatment. A test called the 21-gene expression assay (Oncotype DX Breast Recurrence Score) is used to find out a woman’s risk of having a recurrence. The test is done using a sample of the tumor taken during a biopsy. A higher score means a higher risk of recurrence. Usually, women with a Breast Recurrence Score up to 10 receive only hormone therapy. Women with a score of 26 to 100 receive both hormone therapy and chemotherapy. But there is currently no standard of care for a mid-range score of 11 to 25. It is estimated that about 40% of women with a mid-range score currently receive chemotherapy. Side effects from chemotherapy may include nausea, vomiting, pain, and hair loss, and such long-term problems as infertility and neuropathy. 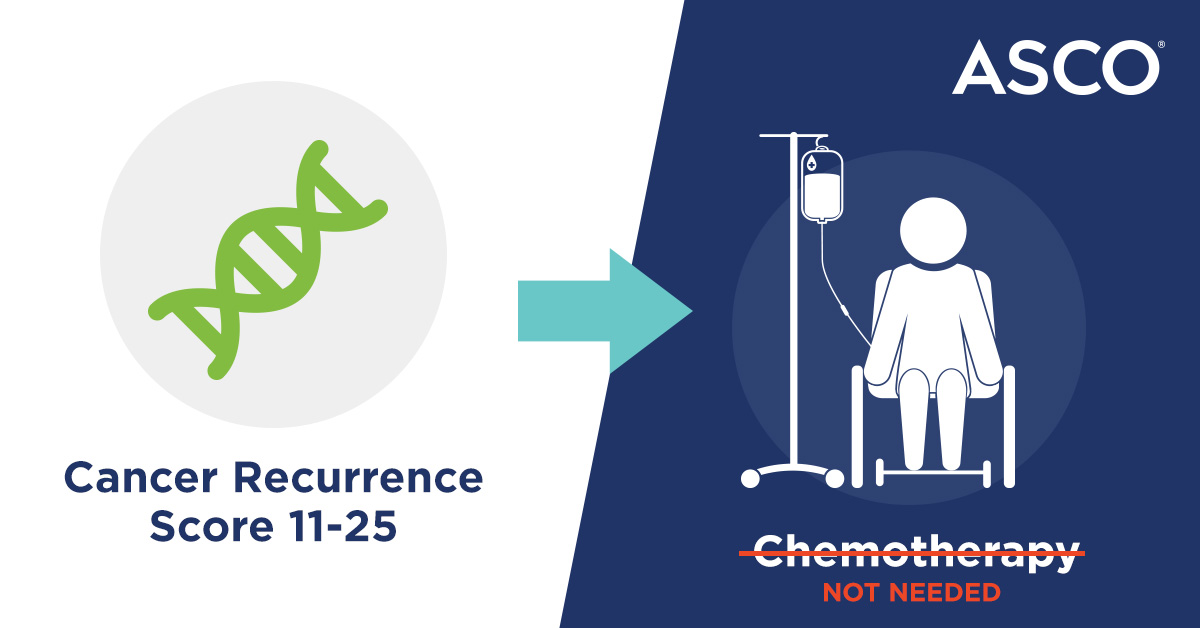 What does this mean? This research suggests that women older than 50 with this type of breast cancer and a Breast Recurrence Score of up to 25 and women age 50 and younger with a score of 15 or below may be able to avoid chemotherapy and its side effects.

“Before TAILORx, there was uncertainty about the best treatment for women with a mid-range score of 11-25 on the Oncotype DX Breast Recurrence Score test. The trial was designed to address this question and provides a very definitive answer. Any woman with early-stage breast cancer 75 years or younger should have the test and discuss the results of TAILORx with her doctor to guide her decision regarding chemotherapy after surgery to prevent recurrence.”

Many people with advanced kidney cancer may not need surgery

Findings from a study of people with metastatic renal cell carcinoma (mRCC) showed that most people who receive the medication sunitinib (Sutent) but do not have surgery to remove the kidney may live longer than those who have surgery.

About 40,000 to 50,000 people worldwide are diagnosed with mRCC, a type of kidney cancer, every year. Currently, surgery to remove the kidney, called a nephrectomy, followed by treatment with sunitinib is the standard of care for this type of cancer. A nephrectomy can cause severe side effects, including blood loss, infection, a blood clot in the lungs called a pulmonary embolism, and heart problems. In addition, people who have this surgery need to wait several weeks to recover before they can start other treatments, and the cancer may worsen during this period. Sunitinib is a type of targeted therapy, which is treatment that targets specific genes, proteins, or other molecules that contribute to cancer growth and survival.

In the clinical trial, called Carmena, 450 people were randomly separated into 2 groups, either receiving only sunitinib or having a nephrectomy followed by sunitinib. All participants had more than 1 metastasis when they were first diagnosed with RCC. The group of people who had surgery started taking sunitinib 4 to 6 weeks after the procedure so they could recover. The median survival of people who had sunitinib alone was about 18 months compared with close to 14 months for those who also had surgery. The median is the midpoint, which means that half of patients lived longer and half lived for a shorter time. The researchers also found that the median time it took for the cancer to worsen was about a month longer for people who only received sunitinib (8.3 months in the sunitinib group and 7.2 months in the surgery plus sunitinib group).

What does this mean? This study suggests that, for many people with metastatic kidney cancer, the best treatment approach may not include surgery.

A European clinical trial of children and young adults up to age 21 with a rare cancer of the muscle called rhabdomyosarcoma found that adding 6 months of low-dose maintenance chemotherapy helped more of these patients remain cancer-free at least 5 years after diagnosis and live longer. Maintenance therapy is the use of ongoing chemotherapy after the initial treatment. Children and young adults who are cancer-free at 5 years are considered cured because it is unlikely for rhabdomyosarcoma to come back after that point.

The 371 patients who participated in this study had a high risk of the cancer coming back after the first treatment because they had large tumors in a part of the body that is difficult to treat, such as inside the head. All participants received the European standard treatment. Then, the patients were randomly placed into two groups. The first group had no further treatment, which is the standard of care, while the second group received low doses of 2 drugs for 6 months. The drugs were vinorelbine (Navelbine), given intravenously (IV; by vein), and cyclophosphamide (Neosar), taken by mouth.

After 5 years, about 69% of children and younger adults who received standard treatment only were cancer-free, compared with almost 78% of those who received the additional maintenance therapy. Overall, about 74% of those in the standard treatment group lived at least 5 years, compared with almost 87% in the maintenance therapy group.

Low levels of white blood cells and fever, called febrile neutropenia, occurred in 25% of patients receiving maintenance therapy. But the number of infections was much lower in the maintenance therapy group than the standard treatment group. Maintenance chemotherapy does bring a risk of long-term side effects, and participants who received it are being monitored for those.

What does this mean? Adding maintenance chemotherapy to the standard of care for rhabdomyosarcoma may help children and young adults who are at a high risk of a recurrence live longer.

While more research is needed based on U.S. practices, this study has already changed the standard of care for rhabdomyosarcoma in some parts of Europe.

“We have been treating rhabdomyosarcoma the same way for more than 30 years, and although different approaches have been tried, this is the first randomized trial in rhabdomyosarcoma to show improved outcomes. By using existing medicines in new ways, we are establishing a new standard of care and, most importantly, we’re helping children and young adults with this rare cancer live longer, with less risk of their cancer returning.”

A large clinical trial found that the immunotherapy drug pembrolizumab (Keytruda) is a more effective initial treatment and has less severe side effects than chemotherapy for most people with non-small cell lung cancer (NSCLC). Chemotherapy with carboplatin plus paclitaxel or pemetrexed is currently the standard of care for treating NSCLC.

The study, called KEYNOTE-042, had 1,274 participants who had either locally advanced or metastatic NSCLC, which is the most common type of lung cancer. Locally advanced NSCLC has spread to nearby tissues or lymph nodes but not throughout the body. Metastatic NSCLC has spread to other parts of the body, and it is challenging to treat successfully. This study did not include people with NSCLC that had genetic changes that can be treated with targeted therapy.

First, the study participants were divided into 3 groups based on the level of PD-L1 in the tumor. PD-L1 is a protein that is found on the surface of cancer cells and stops the body’s immune cells from destroying the cancer. Knowing if the tumor has PD-L1 helps doctors decide whether a patient should receive immunotherapy, such as pembrolizumab. Only patients with a tumor that had a PD-L1 level of 1% or more were included in this analysis. Then, half of the people in each group received chemotherapy as a first treatment while the other half received pembrolizumab.

Researchers found that median overall survival was higher for people who received pembrolizumab than those who received chemotherapy. The median is the midpoint, which means that half of patients lived longer and half lived for a shorter time. The findings included:

What does this mean? More people with advanced NSCLC may be able to live longer and have less severe side effects if they receive pembrolizumab as a first treatment.

“A large number of patients with lung cancer now have a new treatment option with better efficacy and fewer side effects than standard chemotherapy. Our study shows that pembrolizumab provides more benefit than chemotherapy for two-thirds of all people with the most common type of lung cancer.”