From Teen to Survivor: Living With the Effects of Cancer Years Later 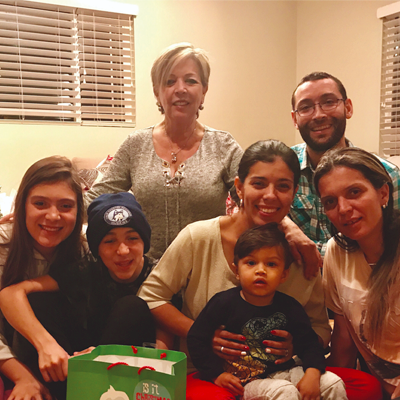 This post was first published on The ASCO Post, January 25, 2019. The ASCO Post communicates news of evidence-based multidisciplinary cancer care to a broad audience of oncology professionals and ASCO members.

In the summer of 2002, I was a physically active 17-year-old boy on the cusp of adulthood. I was about to enter my senior year in high school, and like other teens my age, I was excited about college and the promise of the undreamed-of opportunities that lay ahead. At first, the lethargy I was feeling didn’t alarm me, but when I started taking 2-hour naps in the afternoon and noticed that the lymph nodes in my neck and groin were swollen, my mother became suspicious and took me to our family physician for a checkup. The blood test results showed that my white blood cell count was high, and there was concern that I might have leukemia. A bone marrow aspiration and biopsy determined that I had acute lymphocytic leukemia (ALL).

The only thing I knew about cancer was that my grandmother died of it when I was 10, so to me, cancer was synonymous with death. When the doctor gave my parents the news, they started to cry, but I kept a straight face and didn’t react too strongly to the diagnosis. The doctor told us that I had a 70% shot at a cure, and I was determined to make that happen. I did everything I was told to do. I followed the recommended aggressive treatment regimen and didn’t complain as I watched my weight drop from a fit 205 pounds to an emaciated 135 pounds in just 2 months; my hair fell out and I contended with a never-ending onslaught of fatigue, nausea, constipation, and migraine headaches. But perhaps most troubling of all was the deep depression that started to settle in.

Separating my old life from my new one

On the outside, I maintained a brave face, and my family and friends commented on how strong I was. However, on the inside, I was filled with the fear of death and the possibility that even if I lived, my life would never be the same. I was jealous as I watched my friends start their senior year, get ready for college, and go on dates. Would I ever have a girlfriend? I wondered. After all, who would want someone whose body—and soul—were ravaged by cancer?

To distance myself from my former life, I emptied my room of every reminder of that life, including my guitar, TV, books, and video games, and replaced them with a hospital bed, a desk lamp, and a nightstand. My room became a refuge where I could drop my brave façade, be myself, and cry when I felt like it.

My life after my recovery wasn’t much better. Although the treatment was successful in making me cancer-free 8 months after my diagnosis, the remnants of the disease and its treatments lingered for another decade and to some degree haunt me to this day. I was able to return to high school during the second semester of my senior year, graduate, and start college the following fall. Even though, by then, I had recovered enough physically that it wasn’t obvious I was a cancer survivor, inside I was still reeling. My sense of anxiety became extreme, and I developed an eating disorder. I avoided any social situation that might exacerbate my anxiety and dropped out of classes that required too much student interaction.

Despite these issues, I graduated from college and started a career as a case manager for children with autism, which I still am today. Although my work is rewarding and has helped me overcome the lingering emotional effects of cancer, what has really changed the trajectory of my life and given me a sense of purpose and wholeness again are the marriage to my wife, Ana Maria, and the birth of our son, Max.

I had been concerned that my leukemia treatments had rendered me infertile, so it was a relief to learn that cancer hadn’t prevented me from experiencing the exquisite joy of parenthood. I remember my oncologist mentioning to me that infertility was a possibility with my ALL therapy and suggesting I freeze my sperm before beginning treatment, but at 17, having children was the last thing on my mind. I just wanted to get rid of my cancer.

Today, as part of my work as a patient advocate with Teen Cancer America, a nonprofit organization dedicated to improving the lives of teenagers and young adults with cancer, I’ve made it my mission to raise awareness of fertility preservation before cancer treatment begins. I know that talking with young patients about sex and fertility preservation can be uncomfortable subjects, but that discomfort shouldn’t result in the forfeiture of a young person’s ability to have children after cancer.

Over the years, the cumulative effects of chemotherapy on my body have necessitated a hip replacement due to avascular necrosis of my hip joint, and damage done to my heart requires regular monitoring for hypertension. I try to offset these late effects from treatment by maintaining a regular exercise routine and eating a healthy diet, but I recognize that my life expectancy has probably been shortened, so I make the most of every day.

Not long after Ana Maria and I married, we welcomed her niece, Vanessa, and nephew, Juan, into our home and now consider them our children. Together with Max, the love of my family has helped banish the fear and loneliness I lived with for so many years, and I’m filled instead with hope and gratitude.

The remnants of cancer may still be with me, but now the demons are gone, and I’m finally living the life that was taken from me so many years ago.