ASCO in the Community: “It Was in the Family” 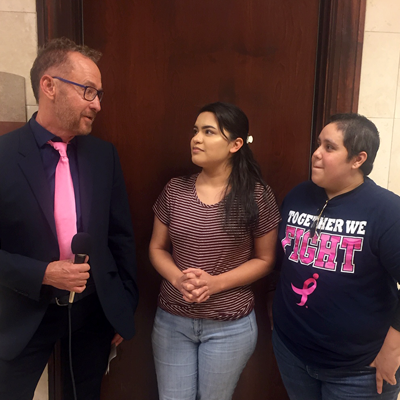 Gary Unzeitig, MD, FACS, is a breast surgeon and principal investigator at Doctor’s Hospital Laredo and is on staff at Methodist Hospital in San Antonio, Texas.

“Caring for every patient. Learning from every patient.” For ASCO President Dr. Monica Bertagnolli, this is more than just a presidential theme. To put action to words, she went out to local communities to speak with patients, caregivers, and oncology professionals. She and other ASCO members are responding to patients’ concerns and, at the same time, they are learning more about the challenges that exist in getting quality cancer care. These sessions were called “ASCO in the Community: Listening and Learning from Our Patients.” In October 2018, Dr. Bertagnolli visited Laredo, Texas, to join a public breast cancer forum and fashion show to celebrate breast cancer survivors and raise breast cancer awareness. While she was there, she and Dr. Gary Unzeitig spoke with breast cancer survivor Kimberly Pena, and Kimberly’s fiancée and caregiver, Deborah Gallardo, about their experience. This post was adapted from those conversations.

Kimberly remembers how she felt when she was diagnosed with breast cancer:

I hid it pretty well, I feel, but I was really scared because [my mind] just automatically went to my mom. She got it 3 times. The one she passed away from was her third time going through it. So my mind just automatically went there. I was like, “This is going not go so well.” Even if [Dr. Unzeitig] was telling me, “It's early, stage II,” part of me was trying to stay positive, but I just always thought about my mom and the battle she went through. And I was like, “No, that's the way it's going to go for me.”

But I think every day that it didn't go that way, obviously—and now I'm more aware.

Kimberly describes her experience of going through surgery and chemotherapy:

I didn't expect it to be so smooth for me. I thought I was going be in a lot of pain. I thought it was going to be too much, and it wasn't at all. I think that was the easiest part for me out of the whole experience. That's what I think that I was more nervous about, was my surgery. That was my first surgery ever in my whole life. So I was a little nervous about it.

But Dr. Unzeitig made it very easy, made me feel very comfortable, and he did a great job. Because I went home, I don't think I really felt any pain. I think if anything it was just mostly getting my motion back with my arms. I did decide to stay flat[chested], which I love that he respected, because I've read many stories of women who say their doctor would frown upon it and would suggest other things. He was like, "Is that what you want?" "Yes." "OK. If that's what you want." And that's when I came in and I was very demanding. I was like, "Look, I want this. I want to be completely flat. Don't leave extra skin. I'm not going to want them in the future." And he's like, "OK." He did exactly that. So I'm very happy with it.

I could not lose weight. I was just always tired. I was like, "There's no way I could go work out the way I feel. There's no way." And I feel like a lot of people didn't believe me. But with my girlfriend at home, my nausea would be relieved by eating. I gained so much weight during the chemo. And unfortunately, all that healthy stuff—for me, what happened was when I first started getting my first 4 chemos, the strongest ones, they would tell me, after chemo, go home and eat something healthy. So I would. I would go get some chicken, some veggies, things like that. But every time, I ended up in the ER from dehydration, from throwing up. So my mind automatically shut out all those foods. Just thinking of those foods made me very nauseous. So then all that healthy food, I couldn't eat anymore because it just made me so nauseous. I would have to eat things that weren't good for me, comfort food. And that's what would make my nausea go away. And so I gained so much weight during the chemos. It's been hard to lose that weight because I still felt the effects of the medicine in my body. But I'm starting to feel a lot better.

I'm not where I wanted to be at this point, but just because I didn't expect to feel some sort of effects of the chemo, even after I was done, I didn't expect that at all. It has been maybe a month that I've been feeling a little bit more up to doing things. Because before that, I just always felt so drained. Always, always felt so drained. I didn't want to do anything. But I'm feeling a little bit more like myself lately.

Having family around was an important part of Kimberly’s journey:

I always had my aunt and my girlfriend, Debbie. It was very rare [to go to an appointment alone.] And that's because they were like, "I want to be there." And I'm like, "It's OK. It's just a quick follow-up." So I'd make them go to work or stay home. But for the most important ones, they were always here.

When [Kimberly] first got diagnosed, I really didn't know what was going to come. I had never been around anything like that. Of course, she had, given her family history. I know the kind of person that she is, so I tried my best to accommodate myself to her as far as giving her space when she needed it, being there for her when she needed it, trying to get her the stuff that worked for her as far as foods or comfortability, her medicine, all that stuff that I knew was going to help her.

At some point, there was absolutely nothing I could do to make her feel better. There was nothing at all in my power to help her be comfortable or help her to stop feeling sick. So even though sometimes she hated me for it for taking her to the hospital, I would still do it because I knew she needed it. But I'm not going to lie, it was pretty difficult. And I couldn't blame her for it. And I know that it wasn't her acting the way that she was, it was just mostly the chemotherapies, the medication, just the fact that she was going through all this, and how can somebody wrap their heads around it. So I tried my best to just be there for her emotionally when she needed me. And as far as anything else, I just think that it just went day by day.

And I don't think it's ever going to be the same because we've learned so much this far. So all I can say is just, I mean, she had been so strong, and I admire her so much for what she went through, and how strong she remained for such a long time. And, given that she's seen this in the past for her close loved ones, I have so much respect and admiration for her.

The risk of ovarian and breast cancer can be inherited in families, so if people are diagnosed with these cancers when they are young, it can be helpful to test other family members for the BRCA gene mutation, which causes many of these cancers. Kimberly is trying to convince other members of her family to get tested for the BRCA mutation:

I'm trying so hard, but I bring it up to my sister, and it's kind of like, “Mm-hmm.” She's like, “You know how I feel about it.” I'm like, “Yeah, I mean, you saw what I went through. Do you want to do—?” And she has 3 kids. She has a husband. It's a lot harder for her because for me, I'm blessed with the family, obviously, that I have and my future wife. She was just amazing to me. But I didn't have kids to look after. I didn't have kids to take to practices, and to school, and to karate. And she's a full-time mom. I was like, “You wait, and it gets to the point where you do need to go through what I did, it's going to be very difficult not only for yourself but your family.” So I'm trying, but she just won't.

And my brother's also like, “No.” In the Hispanic culture, it's very “men are men,” and, “I'm not going to go through that. I'm not going to go check. And that's not going to happen to me. And I'm a man.” So it's very hard to also convince him to come along. My aunt, the one who passed from ovarian cancer, she had 3 boys. So I've mentioned it to them, but I think for them it's the same [as it was] for me. I honestly never thought it was going to be me. I never thought that. So I think that's their mentality like, “No, it's not going to be me. I'm not going to get it.” And I think that's what I feel we need more education about. That it could be them, and if it's early, we can prevent it. It's just preventative measures that we should just take. But that's their mentality, that it's not going to happen to them.

I mean, let's hope it doesn't ever. I pray for that. But it could.

ASCO in the Community: Listening and Learning From Patients in Laredo, TX