A Diagnosis of Advanced Lung Cancer Is Not a Death Sentence 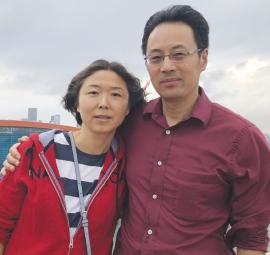 This post was first published on The ASCO Post, July 25, 2020. It has been edited for content. The ASCO Post, in partnership with the American Society of Clinical Oncology (ASCO), communicates news of evidence-based multidisciplinary cancer care to a broad audience of oncology professionals and ASCO members.

In hindsight, the symptoms I began experiencing in the winter of 2013, including pains in my chest and shoulders and a persistent cough, should have rung loud alarm bells. However, having undergone multiple surgeries 5 years earlier to cure a history of mucinous cystic neoplasms of the pancreas, which are typically benign tumors, I didn’t think I would be so unfortunate, at the age of just 39, to have another serious illness to contend with so soon after the last one. Still, once it was clear the symptoms were, in fact, increasing, I didn’t hesitate to make an appointment with my primary care physician.

After examining me, the doctor ordered a chest x-ray, which showed a small nodule on my right lung. She thought it could be caused by pneumonia. She prescribed antibiotics and medicine for the cough and ordered another chest x-ray in 2 weeks. The new imaging scan showed my lungs were clear, and there was no hint of the mass from a couple of weeks earlier.

Unfortunately, a confluence of errors—one from the radiologist who examined the film and deemed it normal, and one from me after choosing to ignore instructions from my physician to have a follow-up chest x-ray in a year—eventually led to a diagnosis of advanced-stage non–small cell lung cancer (NSCLC) and, I feared, certain death.

Going from cure to terminal cancer

At first, my health seemed fine, and there were no hints of the life-and-death struggle that lay ahead. Then, in 2015, the chronic cough and pains in my chest and shoulders returned and were more ferocious than before. A computed tomography (CT) scan found a 3-centimeter mass nestled in the upper lobe of my right lung, exactly where the mysterious mass had appeared—and seemingly disappeared—2 years earlier.

I underwent surgery to remove the affected upper lobe of my right lung, and examination of the mass found I had stage IB NSCLC. The oncologist said I wouldn’t need any further treatment, and my primary care physician told me I was lucky because my lung cancer had been “cured.” I was ecstatic, but my happiness was short-lived.

Three months after the surgery, I began experiencing a sharp pain in my right leg, which was first misdiagnosed as a large cyst on the calf of my leg. Later, it was determined that the lung cancer had spread to my femur. And there was more bad news: a CT scan of my brain found 3 cancerous lesions. Now, I had stage IV cancer and was terrified.

I underwent grueling hip replacement surgery to remove the cancerous bone, followed by months of radiation therapy to my leg and brain, as well as radiosurgery to remove now a total of 10 malignant lesions from my brain. But I knew, despite the treatment, that my chance of recovery was not good. Genomic sequencing of my tumor failed to turn up any gene mutations that could be targeted with medication, so drug selection to keep the cancer manageable was limited and so were my options.

The power of patient advocacy

Throughout this long ordeal, I have been fortunate to have a dedicated patient advocate by my side: my husband, Zhigang Wei, PhD, who has been relentless in pursuing potentially effective therapies for my cancer. Earlier sequencing of the tumor did not detect alterations in any of the 3 major driver genes of NSCLC—EGFR, ALK, or ROS1—which play an important role in lung cancer development and precision treatment, also called personalized medicine or precision oncology. However, more sensitive next-generation genomic sequencing did find I have RET fusion-positive NSCLC, which is detected in approximately 2% of NSCLC cases.

My husband canvassed the internet for information on research advances in RET fusion-positive NSCLC. He received an email response about studies underway investigating RET-targeted inhibitors, which is a type of targeted therapy. One of the clinical trials was studying the kinase inhibitor BLU-667, now known as pralsetinib, which was demonstrating promise against solid tumors with RET alterations.

The clinical trial was enrolling patients with a variety of solid tumors, and I became the first person with NSCLC to receive the therapy. In April 2020, I passed the 3-year mark of being in the study, and currently, my lung cancer shows no signs of progressing and remains stable.

Looking back, I am haunted by a nagging feeling that my cancer may have been caught at an earlier stage, when perhaps cure was possible, if the mass in my lung hadn’t been missed and if I hadn’t ignored the advice of my doctor to have an annual chest x-ray. However, I cannot dwell on the past.

My experience has shown me that a diagnosis of advanced cancer is not a death sentence, but I know not every person with cancer is as fortunate as I am. I want to give back to the medical community that has given so much to me. My husband and I have become staunch patient advocates. Our key message to everyone is that all patients should have access to genomic sequencing and to clinical trials. I would not be here today if I had not been privy to advancements in precision oncology. I want every person with cancer to have that same opportunity to live with their cancer and not die of it.