Oral Cancer Taught Me How Much Words Matter 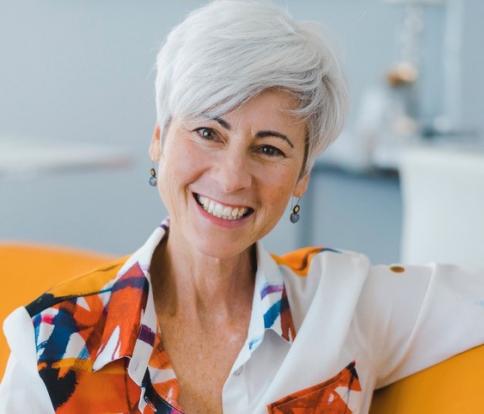 Eva Grayzel is a visionary cancer survivor, motivational speaker, and patient advocate. She founded the oral cancer awareness campaign Six-Step Screening to awaken health care providers to the urgency of detecting oral cancer in the early stages and educating the general public. Eva is also the author of 2 award-winning children’s books to promote dialogue and minimize the fear around cancer. You can follow her on Instagram, LinkedIn, or her website.

Oral cancer gave me a new appreciation for speaking, a skill easily taken for granted. As I was forced to pay closer attention to the delicate organs that produce speech, I was more attuned to the words I spoke. Three weeks after radiation treatments, my seared vocal cords healed enough for me to audibly voice my gratitude. But just as easily, I could express opinions and hurtful judgments with the potential to scar.

There is little truth to the childhood saying, “Sticks and stones may break my bones, but words will never harm.” Broken bones will eventually mend. However, there is no medical mechanism by which the human heart can heal itself from the pain of words weighted with the burn of negativity. Here are 3 lessons I learned about the power of words after my oral cancer experience.

I would catch myself easily finding fault. I would think, “That was a mean thing to do,” or, “I do X, the least you can do Y.” But I tried softening my resentment by posing questions such as, “Why don’t you help out?” or “Why can’t you be nicer to your sister?” They were questions to which I really didn’t expect an answer and were therefore unproductive. I would also use the word “should” when giving criticism, considering it to be constructive. But even expressed lovingly, it could sting.

Then I began to think: if I didn’t survive cancer, would my children remember me as someone who was pushing them to do better, guided by my standards? It’s easy to criticize, especially the people we love and need the most: our spouses, children, and coworkers, for example. It’s much harder to balance criticism with praise. Yet why not take it even further and outweigh criticism with praise? It will make criticism easier to hear.

With a second chance to use my voice more wisely, I vowed to replace easy-to-fling criticism with praise. To start doing this, I practiced the “sandwich technique”: start with praise, communicate the perceived problem, and finish it off with more praise. As I incorporated praise, it became second nature.

2: Give the right kind of praise.

There is no question that hearing nice things about yourself feels good. But is there a right or wrong way to give praise?

When I say to my daughter, “You look so beautiful,” she may not believe she is beautiful just because I say it. Her feelings of worth should not be based on what other people say and think. Otherwise, how will she feel about herself when she has a pimple or doesn’t get dressed up? Or, how will she feel when she ages and wrinkles? Rather than label her appearance, I thought it would be more helpful to identify a special quality in her to develop self-awareness: “You have a great sense of style.” Articulating the traits that shaped her individuality and greatness seemed far more valuable.

But one day, as she was going out with a friend, I looked at her long, dark, beautifully styled hair and said, “You are so creative with hair.” Immediately, I recognized the comparison to her friend who had thin, stringy hair with no obvious talent in that regard. I realized that my compliment was setting my daughter up on a pedestal while placing her friend in a position to be looked down upon. That’s when it hit me: praise had a dark side.

So I learned to make adjustments to how I gave praise. For example, after seeing her straight-A report card, instead of saying, “You are so smart,” I asked, “How does it feel to get straight A’s?” The question alone helped her think about and identify what made her happy. Developing a positive self-image can go a long way.

3: Use words as a learning moment.

Once, when my daughter was a freshman in high school, she came downstairs on her way out with friends wearing a skirt revealing more than it covered. I took 1 look and felt an intense flare of anger. Without taking a breath or taking a moment to formulate a thoughtful response, I blurted out, “Go back upstairs and put some clothes on.”

She mirrored my anger and shouted back at me about her dress being the norm for all her friends. She added how she liked the way she looked. I stood in front of the door blocking her exit. She charged back upstairs, knowing it wasn’t worth the argument, changed into jeans and a t-shirt, and left without a word. She came home to tell me she was the only girl not wearing a cute dress.

Feeling beautiful is a challenge for every young girl, and here I was stealing that from her. Who was responding to her? The girl deep inside me who didn’t feel beautiful; the girl who felt shame for her choices. The best response would have been to tell her how I felt: “I’m frightened your outfit will attract unwanted sexual attention.” This interaction became a blow-out conflict when it could have been a simple exchange of ideas.

Instead of beating myself up over the incident with my daughter, I choose to think of it as a gift. Every triggered emotion is an opportunity to re-evaluate my response and be curious about what I felt and why.

When I reached my 10-year cancer-free anniversary, I decided I had to mark it with a children’s book to help minimize fear and promote dialogue with children around cancer. M.C. Plays Hide & Seek emphasizes feelings children experience and ways to address their emotions in a healthy, comfortable way. It’s everything I wished I had for my children. Children feel important and that their feelings matter when they are included in the “cancer talk.”

From the day my voice returned until today, I’m continually reminded how words matter. Oral cancer stole a third of my tongue, but it did not steal my ability to speak. Instead of responding with criticisms and finding fault, coming from a place of fear or past hurt, I have another chance to respond more thoughtfully from a place of love. Here is to second chances!