How Writing Helped Me Cope During Cancer 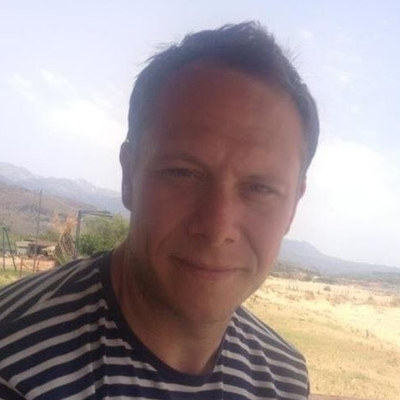 Jonathan Little is a tech entrepreneur and business advisor who lives in the United Kingdom. Jonathan was diagnosed with penile cancer in 2019 and underwent treatment over a 15-month period. He is married with 2 children and writes about his experiences with cancer. He also writes for cancer charities and publications to raise awareness of this rare disease.

You’re never prepared to hear you have cancer. You always think it’s something that happens to other people.

For me, everything happened so fast. I’d gone away with my family for a few days to an amusement park. After driving for 3 or 4 hours, I’d developed an unbearable itch on my penis. While an itchy penis isn’t particularly unusual, this was different. After a much closer inspection, I was streaming a smelly, rust-colored fluid, and my foreskin was thick.

Over the next few days, going on rides and just being dad to my children was becoming increasingly difficult. The itching and streaming was so uncomfortable that it was tough to deal with. When I got home, I took the first available appointment with my general practitioner, but that was only the beginning of my frustration. After a few weeks of misdiagnosis and treatment, a refused referral to a urologist, and 1 referral instead to a sexual health clinic, I was beginning to lose my cool.

In just a few short weeks, the tumor on the head of my penis had grown to around an inch long, and I had a new 1 in my groin that was hard, aching, and ball-shaped. It seemed to be growing on an hourly basis. After applying a great deal of pressure on my health care team, I finally got the chance to see a urologist.

It didn’t take the urologist more than 10 seconds to deliver the bad news and refer me on once again, this time to a doctor who could help treat my penile cancer. Before that point, I had begun to suspect it was something serious, but I was still not prepared to hear that I had cancer. The ground seemed to open up, and I was dragged into a downward spiral. The next thing I could remember was sitting in my car, my face covered in tears. As time stood still, I didn’t know who to tell first or how to tell them. I felt disoriented, almost like I was drunk.

I decided I should tell my wife first, and the words came out easier than I expected. The sound of my 2 young children playing in the background must have flicked a switch. From the pits of despair, a new resolve to just get on and face what was ahead took hold of me. It was time to call my new doctor.

To get a consultation at my new doctor’s private practice took just 2 days. From there, I would undergo surgery another 2 days later. By then, the tumor in the head of my penis was around an inch and a half long, and the 1 in my groin was the size of a tennis ball.

As I was being wheeled down to surgery, I didn’t know how things would be when I woke up. Would I still have a penis? Would it just be a stump? Would I have a skin graft?

After surgery, I found out that my tumor had been trapped inside my foreskin, and a full circumcision with a massive excavation of my groin had been needed to take care of the initial problem. However, more operations to complete the staging of the cancer followed. The results showed that there were a couple of cancerous cells in my left groin, so I had another operation to clear out the rest of the lymph nodes in my groin.

Then, at the height of the COVID-19 pandemic, I underwent another surgery to remove the lymph nodes in my pelvis. My operation was the last at the institution before members of the health care team were sent off to staff the emergency hospitals. After that operation, weeks of chemotherapy and radiation therapy came next. The radiation to my groin brought serious burning and skin peeling, and the chemotherapy brought tiredness and sickness like I’d never felt before.

How writing helped me get through cancer treatment

As I continued treatment for my cancer, I knew I had to tell my family and friends, so I started sharing my journey on Facebook. I wanted to take control of my own story, stop the rumors, and make sure everyone I knew and cared about had all the info. It can be tough for men to talk about illness. I suppose it’s ingrained in many of us from a young age to "stay tough” by not showing weakness and not showing people that you’re hurting. But this was my way to be tough; I was taking control.

During treatment, I knew that I would have a lot of time with my own thoughts. I would often have thoughts that weren’t easy to articulate in conversation, and there were things I wanted to say but couldn't. I knew I needed a forum I could turn to that wouldn't talk back or ask me to justify myself or explain how I felt. So I started to write. Looking back, writing was great therapy for me. It helped me to reflect and see how far I'd come.

More than anything, though, writing gave me something to concentrate on while the hours were drifting away during treatment. Cancer can be a marathon, and it can take effort and time to overcome. I found that a lot of that time is spent waiting: waiting for surgery, waiting to recover, or waiting for treatment to finish. I needed something to soak up the white noise, and writing gave me that.

As the popularity of my writing grew, I started to move everything over to my blog, called Knob. Over time, the blog became a way for me to record everything that had happened, including how I felt and what I’d learned. I just had a feeling that everything I’d been through might help someone else going through a similar situation.

The weeks and months crawled on. I struggled to stay fit, and I slept a lot. I felt broken. The drain bottles, dressings, and overall discomfort from surgery wore me down. Being admitted to the hospital twice with sepsis dragged me down even further, and I’d never felt so ill. But still, I kept writing and telling my story. It had become my therapy.

Now, a year on, I’m still taking medication every day to manage the infection risk, but I’m getting fit again. I’m running every day and making my way back to full health. I’m also still writing. The experience has been tough, but I feel like I’m winning.