Can Getting a Tattoo Cause Cancer? 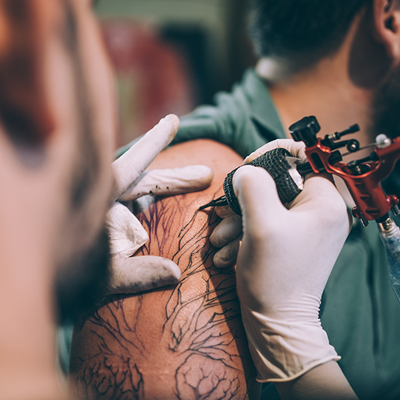 Tattoos can express love, joy, remembrance, or strength. They have long been a popular way to add art or design to our bodies, from a small tattoo up to a prominent design like a custom arm sleeve or full back tattoos. For instance, some people who have had breast cancer have beautiful, botanical images tattooed on their chest after having a mastectomy.

But if you have a tattoo or are considering getting one, you may be concerned about the potential health risks of tattoos, including whether tattoo ink could lead to cancer. But is there actually a link between tattoos and cancer? Here, we explain the research on tattoos and skin cancer and other concerns people may have around the risks of getting a tattoo.

Is there a relationship between tattoos and skin cancer?

Reports of skin cancer developing from tattoos are rare, and it’s often hard to say why they occurred. Recent examples of skin cancer after a tattoo include case reports, or individual patient descriptions, of basal cell carcinoma forming in an eyebrow tattoo and another of it forming in a back tattoo. There have also been reports of melanoma forming in tattoos. However, randomized, controlled clinical trials, which are the gold standard of cancer research, have not yet studied whether a link exists between skin cancer and tattoos.

Existing reviews of medical literature suggest that a relationship between skin cancer and tattoos might be mostly coincidental. A 2012 review of studies in The Lancet Oncology, for example, found 50 cases of various types of skin cancer on tattoos over the course of 40 years. According to the review authors, considering the millions of people with tattoos in the world, this number of cases "is seemingly low” for a causative link. However, the authors urged for further study of the issue. A 2016 review of the medical complications of tattoos in Clinical Reviews in Allergy and Immunology had similar conclusions, as the authors found no defined association between cancer and tattoos.

“I wouldn’t say that having a tattoo predisposes you to skin cancer,” says Suzanne Kilmer, MD, FAAD, a clinical professor in the department of dermatology at the University of California Davis School of Medicine and a spokesperson for the American Academy of Dermatology. “Many people have tattoos and many people have skin cancer, so it’s going to happen. But does 1 cause the other? Probably not. But we just don’t know.”

“There is an increase in both the number of people getting tattoos and the number of skin cancers, so invariably there will be skin cancers that will develop in a tattoo. However, to date, there is no evidence that tattoos play a causative role in the development of skin cancer or other types of cancer.” – Ryan J. Sullivan, MD, attending physician in the Division of Hematology/Oncology at Massachusetts General Hospital (MGH) in Boston, Massachusetts, and the 2016-2022 Cancer.Net Associate Editor for Melanoma and Skin Cancer

Tattoo ink contains pigments that give tattoos color and definition. A tattoo is created by the artist injecting this ink into your skin using various tools and techniques.

However, the U.S. government does not regulate the chemicals that are in tattoo inks, and no tattoo inks have been approved by the U.S. Food and Administration (FDA). Instead, the FDA collects data on adverse, or unexpected, reactions to the inks and intervenes if serious safety issues arise.

Allergic reactions are the most frequent problem Kilmer sees arise from tattoos in her dermatology practice. “If something is irritated, see a dermatologist,” Dr. Kilmer says.

One concern around the use of tattoo inks is the risk of infection from unclean equipment or ink contaminated with bacteria or mold, according to the FDA. Unfortunately, there’s no simple way to tell if the ink is safe. So if you’re considering getting a tattoo, review your state regulations and check with your local public health department to see if a tattoo artist or parlor is in good standing. Then, ask the tattoo artist or parlor about their sanitation procedures and the type of equipment and inks they plan to use.

Are there risks to hiding moles with tattoos?

A tattoo could potentially make it challenging to watch a skin mole for suspicious changes, and the colors in tattoos might also disguise changes to moles that can indicate skin cancer. That’s why it’s important to talk with a dermatologist if you have any questions about your skin or moles before getting a tattoo.

A general good rule of thumb is that tattoos should not be placed over any moles. “People should not get a tattoo over any funny looking moles,” says Dr. Kilmer, adding that you could camouflage a cancerous mole or risk irritating it.

How about sunscreen and tattoos?

Sunscreen and other sun safety measures are important whether you have a tattoo or not. Some tattoo inks are photosensitive, which means they react in the sun. Photoactivation can then make the ink break down and fade over time.

It’s also important that all people, regardless of if they have a tattoo or not, should get recommended skin cancer screenings if they are at an increased risk for skin cancer. And, everyone should talk with their doctor about any changes they notice in their skin or to any moles, including after getting a tattoo.