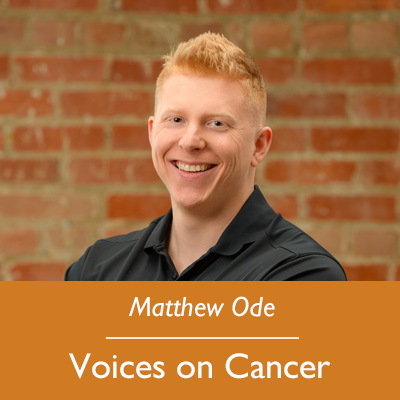 Voices on Cancer is an award-winning Cancer.Net Blog series where advocates share their stories and the lessons they have learned about being a cancer advocate. Matthew Ode is a stage 3C testicular cancer survivor who was diagnosed with the disease at age 24. Today, he is a keynote motivational speaker and patient advocate who works to help young adults with cancer overcome the mental, physical, and emotional struggles of the disease to live a life full of purpose and impact. You can follow Matthew on Instagram and Facebook.

On August 12, 2016, my life changed forever. I had been vomiting blood, could barely stand, and felt like I had the worst flu of my life. When I went to the hospital, I learned that my total blood count was down to a third of the average male; it was equivalent to someone losing blood from a gunshot wound.

I received a blood transfusion, which required 6 bags of blood, and then I underwent an endoscopy. The next day, as I was sitting in the recovery room with my parents waiting to be released, my doctor walked in with a blank stare in his eyes. He sat down and said, “Matt, we found an 11-centimeter tumor in your small intestine. We believe it is cancerous. We need to get you to the clinic immediately.” Right then, my entire life flashed before my eyes.

After arriving at the treatment center and undergoing multiple tests, I was diagnosed with stage 3C testicular cancer. I was 24 years old. To start my treatment, I was given intense chemotherapy. Each round of chemotherapy became more difficult than the last, both physically and mentally. I began to lose the red hair that had always defined me. Then, we had to lay to rest my 3-year-old Boxer, Duke, who had been battling cancer alongside me. It was a tough mental roadblock for me. After a period of grieving, I relied heavily on the support of my girlfriend Lauren, and I dedicated my final rounds of chemotherapy to Duke.

When I finally reached my last day of chemotherapy, it was 1 of the most gratifying days of my life because I knew I would start feeling like myself again—or so I thought.

After 3 months of chemotherapy, I hit a brick wall of complications. I underwent a complicated 11-hour surgery to remove the rest of the cancer from my body. Two weeks after, the surgery caused my kidneys and liver to shut down my body, forcing me into a 2-week-long coma. During this time, my doctors weren't sure when I would wake up, and my family and Lauren were informed that I would likely be on dialysis for the rest of my life.

One week out of the coma, another major complication hit. I went into cardiac arrest, and nurses had to perform 8 minutes of cardiopulmonary resuscitation (CPR) to bring me back to life. After another week-long coma, I had to relearn how to walk and live my life all over again.

Just as I began making progress and was ready to move into my last few days in rehab, another setback occurred. As the nurses were wheeling me into my final recovery room, the stitches from my previous surgery burst open, and my spleen was now sticking out of my belly. I was then rushed in for another major surgery that caused a football-sized open wound on my belly; it was a rare case in which the surgeon could not close my skin back up. After 40 days under watch and care in the intensive care unit (ICU) and an additional 53 days at the treatment clinic, I was finally released from the hospital and on my road to recovery.

Before my cancer diagnosis and the subsequent treatment, I was a personal trainer who weighed 185 pounds. But within 8 months of my diagnosis, I dwindled down to a mere 110 pounds. Through multiple years of recovery, support, and faith, I am now healthy and back to my original weight.

Using my story to help other people living with cancer

Throughout my recovery, I realized that the effects of cancer don't stop when you are officially declared cancer-free. Rather, it continued to affect me in other ways, including through scanxiety, post-traumatic stress disorder (PTSD), feeling alone in my struggles, figuring out my new path, and recovering from the physical setbacks. After 2 years of intense recovery mentally, emotionally, and physically, I felt lost trying to figure out the next step in my journey. But as I began sharing my story with others, I realized that I was not alone. In fact, there were many others facing the same challenges I did during the recovery process.

After having this realization, I became committed to helping other people with cancer find their own path and purpose while on their road to recovery. To help them do so, I created a Facebook group back in October 2020 dedicated to helping people with cancer, survivors, and caregivers. This family-based community of over 2,000 members is unique because it is not just a support group but also a space for mentorship. As a mentor in the group, I am helping individuals overcome the mental, emotional, and physical aspects of cancer so they can use their experiences to discover their own purpose in life after cancer, while still helping others along the way.

In addition, as a motivational speaker, I am using my journey of resilience and perseverance to help my audiences turn their current setbacks into a setup for becoming the best versions of themselves and make a huge difference in others’ lives. I serve as a guide for those struggling through their own journey, and my mission is to show the world the real, tangible results that I have created over time.

If you are trying to get involved with patient advocacy, I would start by making sure you have taken care of yourself first. Once you have done that, I would dive into the cancer community to see what other people with cancer and survivors are struggling with. You can join Facebook groups, engage with other people on Instagram, and follow Twitter hashtags related to cancer. You can also get involved with other organizations or nonprofits looking to promote awareness around your specific type of cancer. Lastly, start looking back and revisit the challenges you were able to overcome. This is what ultimately helped me realize that I could give back to others in an impactful way.

From surviving cancer to experiencing a coma, kidney and liver failure, cardiac arrest, 5 surgeries, and so much more, I now feel I have been given a second chance in life. I want to give back to the world by showing people that your setbacks do not have to define you. Instead, I have found that they are the pinnacle to my growth in life.