Approved by the Cancer.Net Editorial Board, 05/2020

ON THIS PAGE: You will learn about how doctors describe a cancer’s growth or spread, as well as what the cancer cells look like under a microscope. This is called the stage and grade. Use the menu to see other pages.

Doctors use diagnostic tests to find out the cancer’s stage, so staging may not be complete until the doctor performs a biopsy. Knowing the stage helps the doctor to decide what kind of treatment is best and can help predict a person's prognosis, which is the chance of recovery. There are different stage descriptions for different types of cancer.

The results are combined to determine the stage of cancer for each person. There are 5 stages: stage 0 (zero) and stages I through IV (1 through 4). The stage provides a common way of describing the cancer, so doctors can work together to plan the best treatments.

Here are more details on each part of the TNM system for salivary gland cancer:

Using the TNM system, the "T" plus a letter or number (0 to 4) is used to describe the size and location of the tumor. Tumor size is measured in centimeters (cm). A centimeter is roughly equal to the width of a standard pen or pencil.

Stage may also be divided into smaller groups that help describe the tumor in even more detail. Specific tumor stage information is listed below.

T0 (T plus zero): No evidence of a tumor was found.

T1: Describes a small, noninvasive (has not spread) tumor that is 2 cm at its greatest dimension.

T2: Describes a larger, noninvasive tumor between 2 cm to 4 cm.

T3: Describes a tumor that is larger than 4 cm but not larger than 6 cm and has spread beyond the salivary glands but does not affect the seventh nerve, the facial nerve that controls expression, such as smiles or frowns.

T4a: The tumor has invaded the skin, jawbone, ear canal, and/or facial nerve.

T4b: The tumor has invaded the skull base and/or the nearby bones and/or encases the arteries.

N0: There is no evidence of cancer in the regional lymph nodes.

N1: Cancer has spread to a single lymph node on the same side as the primary tumor, and the cancer found in the lymph node is 3 cm or smaller.

N2: Describes any of these conditions:

N3: The cancer found in the lymph nodes is larger than 6 cm.

The "M" in the TNM system describes cancer that has spread to other parts of the body, called distant metastasis.

M0: Indicates the cancer has not spread to other parts of the body.

M1: Describes cancer that has spread to other parts of the body.

Doctors assign the stage of the cancer by combining the T, N, and M classifications.

Stage I: Noninvasive tumors (T1, T2) with no spread to lymph nodes (N0) and no distant metastasis (M0). 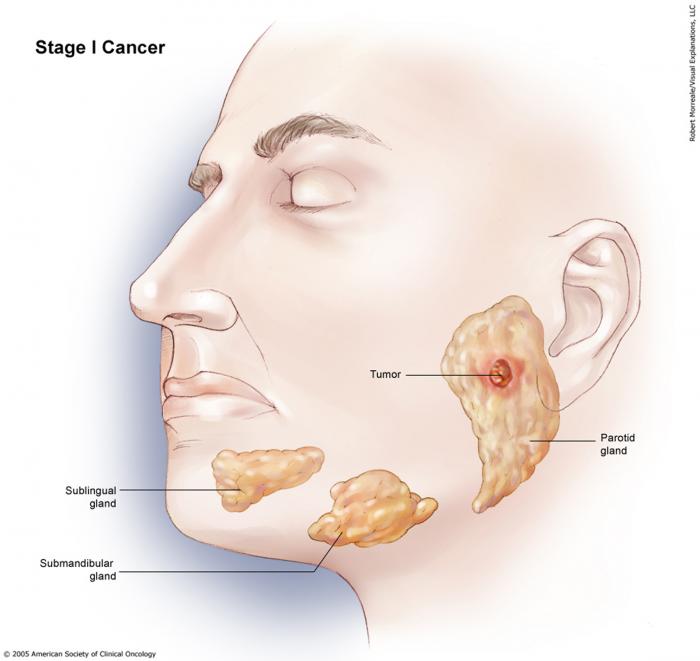 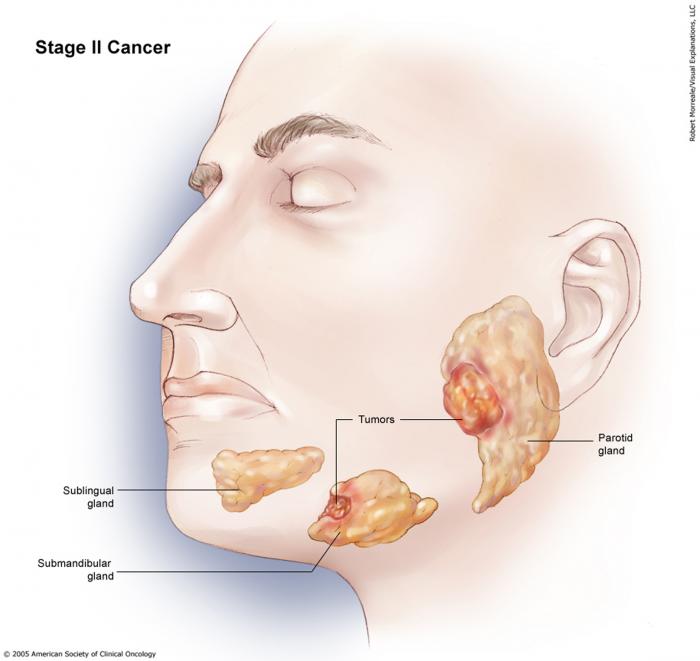 Stage III: Smaller tumors (T1, T2) that have spread to regional lymph nodes (N1) but have no sign of metastasis (M0). 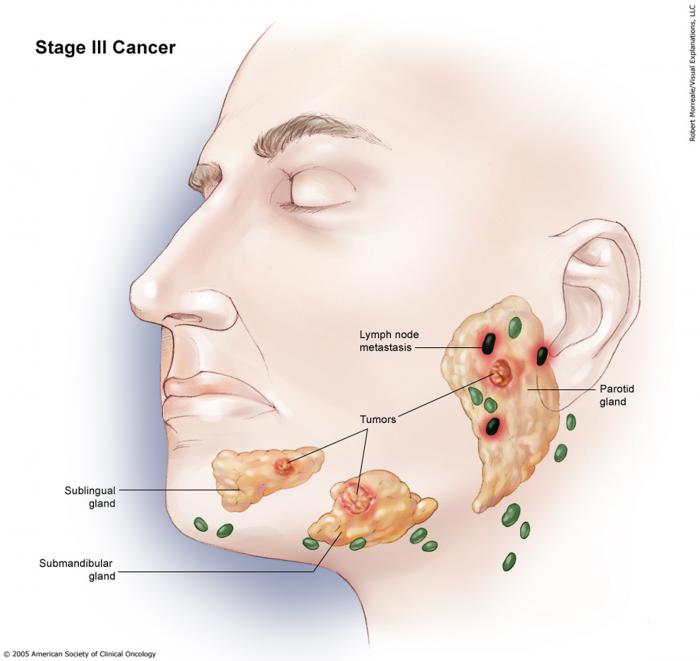 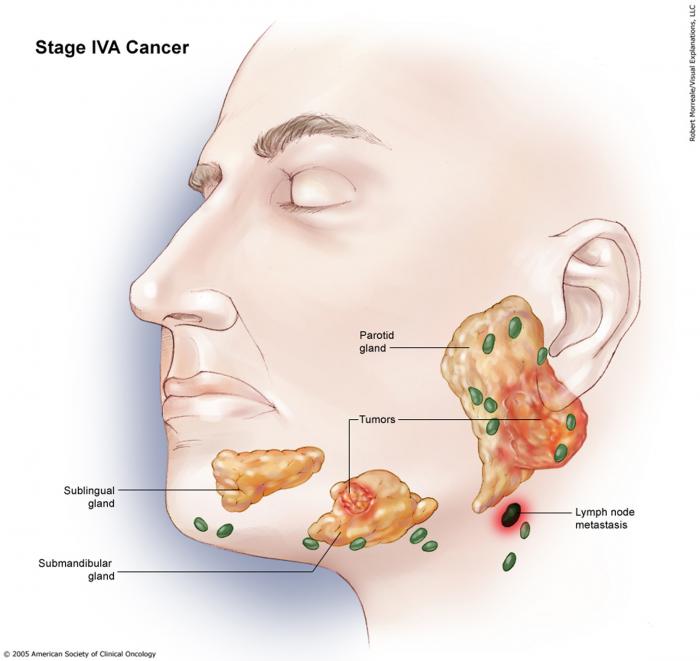 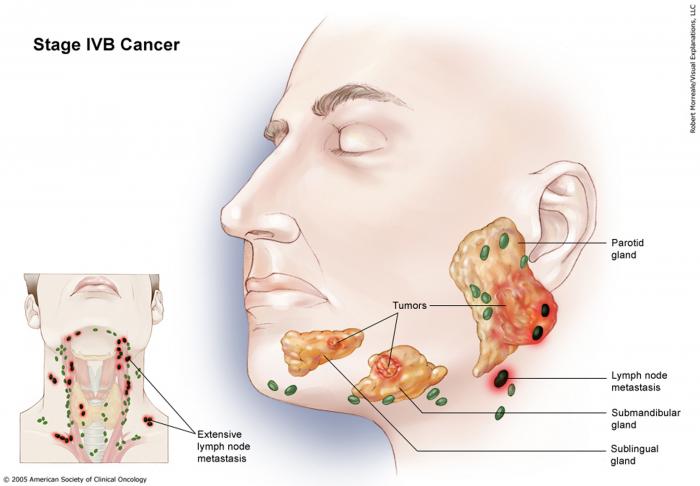 Stage IVC: Any cancer with distant metastasis (any T, any N, and M1). 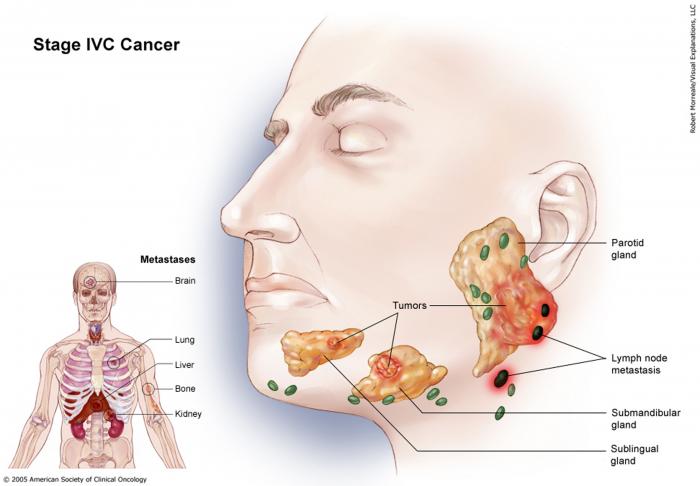 Recurrent: Recurrent cancer is cancer that has come back after treatment. If the cancer does return, there will be another round of tests to learn about the extent of the recurrence. These tests and scans are often similar to those done at the time of the original diagnosis.

Used with permission of the American College of Surgeons, Chicago, Illinois. The original and primary source for this information is the AJCC Cancer Staging Manual, Eighth Edition (2017) published by Springer International Publishing.

Doctors also describe this type of cancer by its grade (G). The grade describes how much cancer cells look like healthy cells when viewed under a microscope.

Information about the cancer’s stage and grade will help the doctor recommend a specific treatment plan. The next section in this guide is Types of Treatment. Use the menu to choose a different section to read in this guide.